Carrie, Diana and I had, very long ago, visited New York from Boston via the infamous Chinatown Fung Wah Bus and made a pitstop at a bakery for bubble tea and classic Chinese pastries.  At the time, I had no idea what was what in life (being a very picky eater in my youth), but all I could remember after that trip was the bakery's delicious fresh watermelon drink, their delectable coconut buns and visiting Tom's Restaurant (because I was and still am a Seinfeld superfan).

When Carrie visited me in New York shortly after I had moved here, she asked me about that bakery, and I had NO CLUE what its name was or where it was, especially since Chinatown is a pretty vast area with a dozens of bakeries scattered throughout.  I took her to Taipan, at the time, but in the deepest of our hearts, we yearned for that one bakery.

So I kept exploring the area each week, and persistence paid off: I found our holy grail of Chinese bakeries! 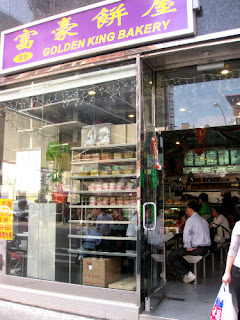 Golden King !  Hester and Bowery !  Don't forget it ! I was SO excited to finally try the watermelon bubble drink we had long ingrained in our sweet memories, and I am happy to say it tastes just as good today as it did over 7 years ago.

Ever since finding Golden King, I stopped visiting other bubble tea spots.  Who needs them when you have found perfection??  Well apparently you need them in the winter, when Golden King no longer serves fresh fruit drinks.  Their milk tea is okay, but their watermelon tea is the absolute bomdiggity.

So after drinking that watermelon drink from Brooklyn Flea, I just knew it was that time of season when Golden King had watermelon drinks again !  So I went to go check it out on Sunday. 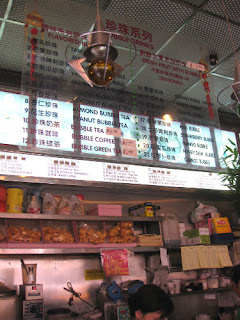 Their bubble tea menu hangs over head on a clear plastic board.  They have the requisite powder flavored drinks on the left ($2.50) and the better seasonal, fresh fruit drinks on the right ($3.00).
I've had both mango and watermelon so far, and both are great. 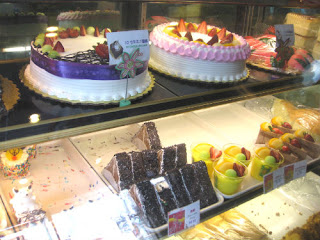 At the front of the bakery is a refrigerated case with assorted Chinese cakes and desserts. 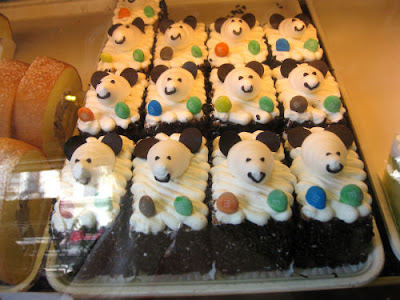 They always have some sort of really cute desserts.  (Asians are so good at making Really Cute Desserts.) 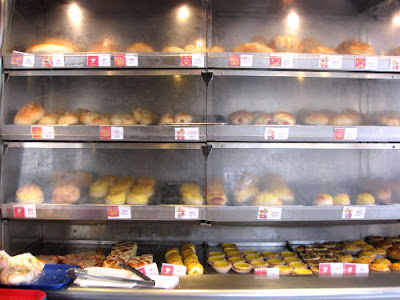 Along the side is their wall of bready pastries including sweet rolls of all sorts like pineapple buns, coconut buns and egg custards. 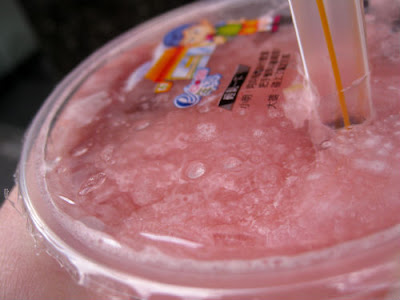 Guess what I ordered. 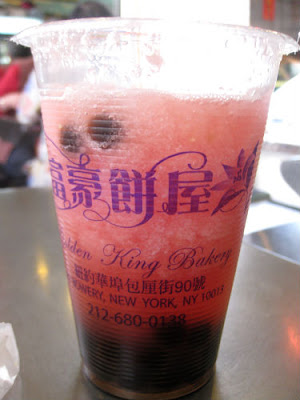 You bet your bottom dollar I did!  You can also see how I guzzled a good part of it down before I decided to take a picture.  It was SO good.  The pearls here are always fantastically bouncy and fresh.  The watermelon slush is a bit erratic in ice texture, but truthfully I don't really mind because it's fresh watermelon and awesome boba, dude. 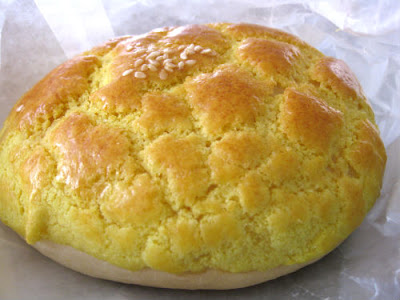 Guess what else I ordered. 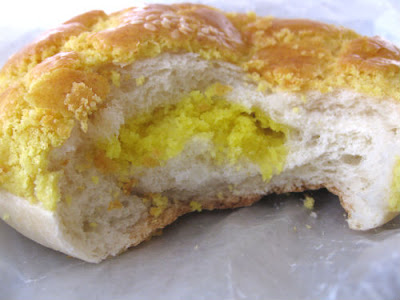 Heck yes at coconut buns !  Eighty cents of delightful pleasure that has a fun, yellow, coconutty center.
On my way out from Golden King, I espied an oven to the side of the baked goods that had steamed pork buns with eggs.  Like what??  I had no idea they even had those !  I will have to check those out on a future visit.

Oh I also saw Diana while I was leaving: 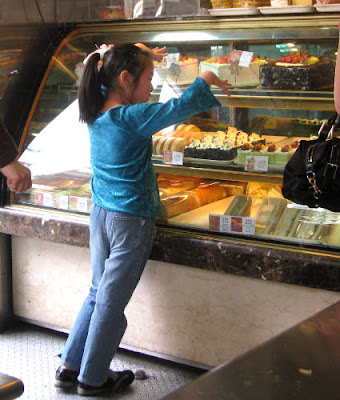 This is what I imagine Diana to look like when she was young. :- )
Then I took my bubble tea down Bowery to visit my designated lunch spot, Congee Bowery. 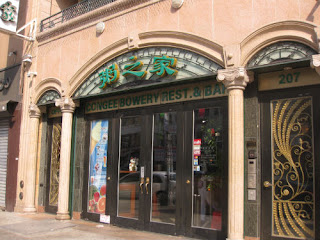 Congee Bowery
Congee Bowery is a few blocks away from the bulk of Chinatown.  When I entered, I was immediately impressed with its excellent decor. 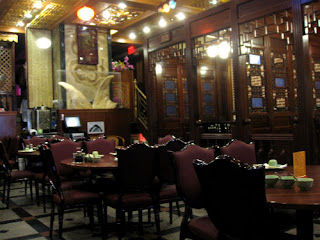 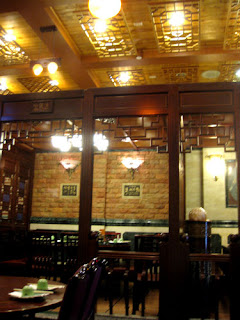 Fine attention to detail including ceiling fixtures.  They have three semi-enclosed rooms, shown above, that can be used for large groups.
This easily had to be the nicest Chinese restaurant I have been in yet.  It was also empty, because apparently I am the only one who wants to eat congee at 3 p.m.  There really is no wrong time to eat congee though. 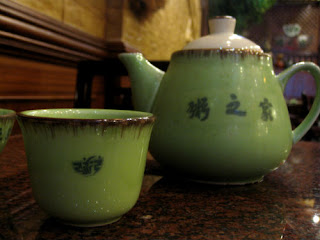 After you're seated, they bring you a nice piping hot pot of tea.  I love Chinatown restaurants because tea is always free. 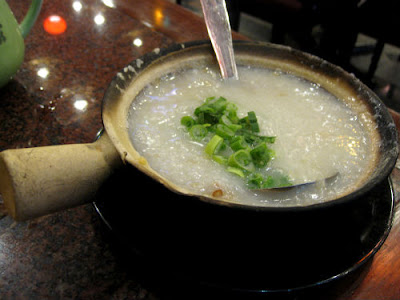 Congee is served in these fun clay pots and comes slightly bubbling! 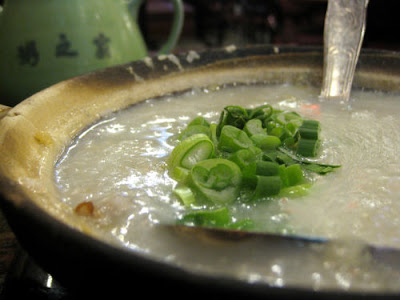 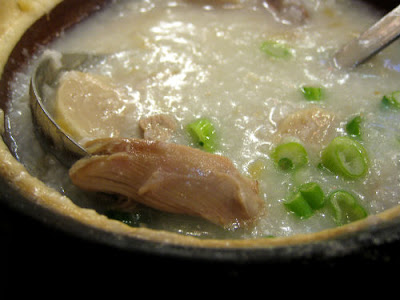 I know you were wondering where the meat was, because surely I didn't order a vegetarian bowl of congee!  You know me so well.  I ordered roast duck + meatball congee. 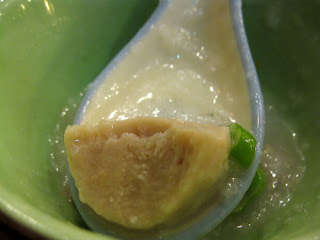 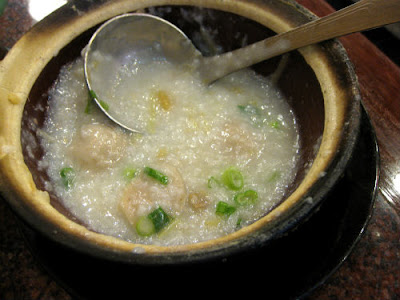 I am usually a very fast eater, but this bowl of congee was way too hot to eat quickly, so it forced me to slow down, really take time to enjoy its comfort and ponder the wonders of life.  There was a lot of pondering going on since this bowl was so infinitely deep.
After finishing that entire bowl of congee, I am now a megafan of Congee Bowery.  The duck was flavored so well, and extra succulent in soup, and the meatballs tasted great too.  There were even strands of fresh ginger throughout the soup adding great texture. All for $3.95!  Bargain city.

I plan to come back real soon to try their purportedly excellent Cantonese fare including the house special chicken and blue crab in ginger scallion sauce.  Can't wait!