Helloooooooo!  I am finally back in NYC (just in time to meet Hurricane Irene)!  I arrived this morning, got some staples from the grocery store to bunker down in the apartment during the storm, cooked some Thai green curry and then took a nap that somehow lasted 8 hours this afternoon.  Oops!  This jetlag might be harder for me to kick than I thought, but maybe it's a good time for a post!

My favorite meal during my four week stay in India was at the Mango Tree. Mango Tree is quite well-known among visitors to Hampi, a village in Southern India that attracts visitors for its collection of over 300 monuments, ruins and temples from the 13th-15th centuries; the ruins at Hampi are one of the dozen+ World Heritage sites in India.


We took a tour guide around and saw so many amazing structures that have stood the test of time, several others did not survive the Mughal carnage, so I could only imagine how spectacular the village used to be in centuries past.
By nightfall, we had all worked up mighty appetites.  Some of the tripmates were a touch cranky at this point, and they were losing patience at finding this illustrious restaurant.  "Why do we have to go to Mango Tree?  What is so great about it?!"
Upon parking outside the gates, we walked several yards through a dark path lined with banana trees.
"Why is it called Mango Tree?!  These are banana trees!  It should be called Banana Tree!"  Man.  Crankiness was increasing.  We needed to get food fast! After washing up at an outdoor basin, we had to remove our shoes before walking inside the restaurant. And then instantly, everyone understood why it was so famous.  It was just.
So.
Freaking.
Adorable.  Intimate.  Amazing. 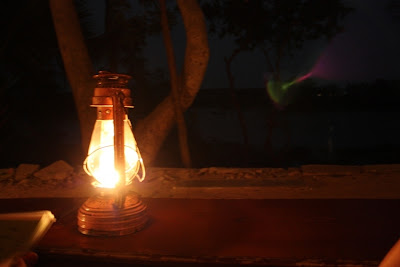 Low wooden tables were lined against stone walls - the only light eminating from old copper oil lamps.  You sit on the ground, atop bamboo mats, backs leaning against the cold stone facing out to a lovely lake, shimmering under the moonlight. 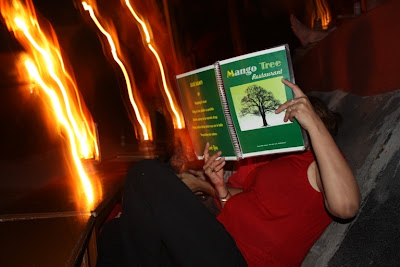 The whole ambience was so unbelievably and ridiculously charming.
The menu, completely vegetarian, offered varied cuisines including pancakes, Italian pastas, parotas, a few Chinese dishes and several Indian plates.  We ordered several dishes, most for ourselves with some to share (we were hungry!).
Parotas were described to us by the waiter as resembling a pie with filling.  It is essentially a round turnover and comes with many filling options.  Jaspreet ordered tomato and cheese and was underwhelmed by her dish.  It was nice and chock full of fresh diced tomatoes, but she wanted a bit more punch in flavor.  The crust was quite nice though - crisp and piping hot from the oven. 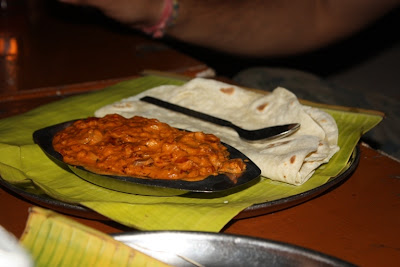 I don't remember what Sumit ordered, but I assume it has paneer (cottage cheesesque cubes), and he really liked it, despite the fact that he's a proud non-vegetarian eater to the max. 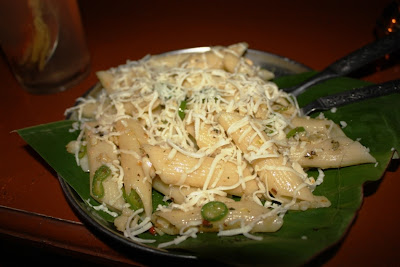 I ordered the pasta with fried garlic with a special request to make it spicy.  I had my doubts looking at the sauceless pasta after it was delivered, but with the very first bite, I was in love.  The bits of fresh garlic mixed with spicy jalapeno tossed in light oil made an intoxicating combination of simple fresh flavors.  I'm going to have to experiment and replicate this dish at home.  I ate every penne piece, at which point my leftover cheese, garlic, chile toppings were then scooped up to be stuffed into Jaspreet's parota.  Consider that parota's flavor officially punched! 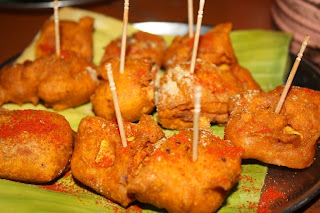 Not sure of the official name of this, but essentially paneer fritters topped with paprika.  Crunchy, hot and tasty. 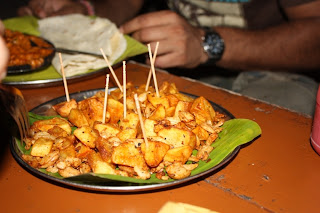 Ferhana had the great instinct to order fried potatoes.  Seeing as I hadn't had a fried potato for a few weeks at this point, I found them particularly addictive.  Crispy and wonderfully salty - I am pretty sure I polished off half of this plate myself.

For dessert, I ordered banana fritters which were heavy on the batter, but otherwise good, though I was too full on pasta and potatoes at this point to fully appreciate, though I did polish off two. 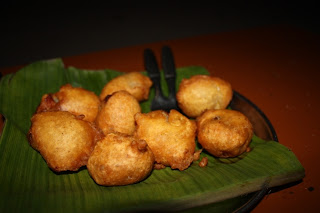 Jaspreet ordered a pancake for dessert, which resembles more of an open-faced crepe than a pancake.  It was topped with creamy chocolate sauce and fresh bananas.  She gobbled this sucker up. 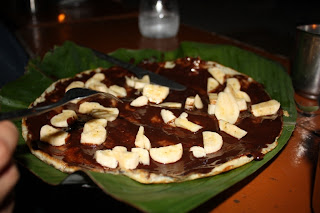 The food at Mango Tree is quite simple, freshly prepared and delicious.  I couldn't imagine a more fantastic place to spend the eve after imagining the glory of the temples and buildings at their height during the 14th century. 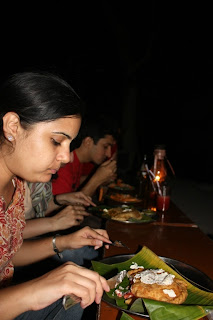 If you make it out to Hampi, which I recommend you do if you love historical ruins and World Heritage sites, definitely make it out to Mango Tree.  I regret not eating multiple meals here!

Mango Tree
Hampi, India
(Not sure on the address, I think all the villagers are aware and can direct your driver there)
by han 5 comments:

Rick Bayless, as I have said many times over, is a genius. His restaurants around the country are routinely praised and always hoppin' for a reason...

So it's no surprise that every time I visit Chicago, we go straight from the airport to Xoco, Rick's super trendy Mexican quick food restaurant, offering scrumptious sandwiches and other delights (don't even get me started on the churros!). Xoco deserves a full and long post (which will sadly have to wait until another day), but I just had to show you what I ate on Friday. We'll have to thank my blackberry for these on-the-fly pics.

I started with the vanilla soft-serve with maple-bacon streusel and caramel.

I almost died of happiness. The salty-sweet combo of the bacon and maple, mixed with yumminess of the caramel and the creaminess of the soft-serve... yeah. This baby is legit, and every single calorie is worth it.

Grilled to perfection, this torta oozed in all the right places. The flavors were fresh and complex, and I'm just sad my stomach wasn't big enough to finish this meal off with churros...

Visit Xoco, my friends! And be prepared to wait in a line. :)

Red velvet: Two of my favorite words in life

Many apologies!! With Han in India, and my day job going crazy, two weeks flew right by without an update from us! In lieu of a full post, I thought I would just tease you with a picture from Max & Dylan's here in Boston. After snapping up this picture with my blackberry, I inhaled it:

I rarely say no to a red velvet cake on the menu. The best part? You know it already, because it's staring you in the face.... the layers of white frosting + chocolate ganache! The cake itself didn't have enough of that clutch cocoa flavor, but the layers in between totally made up for it. Creamy and decadent to the Max (buwahah). I didn't even use the side of extra chocolate ganache. I will next time, though. Just because I can.