Finally, we're bringing you the wanderings, thoughts, and most importantly, delicious eats we experienced earlier this month!! Basically, our appetites (very happily) tore through the pacific northwest. I don't know about you, Han, but my stomach is still growing from our trip. That's what I call a success!

Our itinerary was, in one word, daunting. So much to eat in so little time. Ever the strategizing consultant, Han came up with the brilliant idea of having two dinners on our first night, so we could fit in more foodseeing. Genius.

We landed in Seattle and headed straight to dinner spot #1: Elliott's Oyster House. This is what we were greeted with when we stepped in: We were so hungry and ate more of this bread than we should have. It was warm sourdough and magical butter, how could we stop?

We both had a cup of the oyster stew: willapa bay yearling oysters simmered in natural nectar with cream, bacon, shallots and croutons. I cannot describe to you how amazing this stew was. Wonderfully creamy, and the flavors all went together perfectly. The stars of the stew were the biggest oysters I'd ever seen... ever. Plump, juicy, and fresh to the max! The crab cakes were pleasantly all crab, and again, very fresh. The slaw and chili sweet&sour sauce that came with were both asian-inspired. (The best way to be inspired.)

And then pan fried oysters served with bourbon whiskey sauce and tartar sauce: The oysters themselves were absolutely delightful, and as they were in the stew, gargantuan. The above picture shows only TWO of these oysters... both bigger than Han's finger! I was a bit disappointed with the sauces though. The bourbon whiskey sauce was a little too jarring, and the tartar sauce could have been thicker and could have used more relish. I would have also preferred a lighter breading to keep the focus on the actual oyster.

By this time, Han and I were almost dying from the quantity of food inhaled. But we were not defeated, because we then drove straight to dinner spot #2: Serious Pie. Serious Pie is a Tom Douglas restaurant, and as we learned during our stay in Seattle, Tom Douglas basically is the king of the Seattle dining scene and owns 99/100 of the top Seattle restaurants.

After our feast at Elliott's, we had room to share only one pizza, so we followed Tyler Florence's footsteps and ordered the chanterelle mushrooms and truffle cheese pizza. This pizza was pretty good, and I particularly enjoyed the crust, but I wasn't blown away by any of it. To be fair, by the time I ate the first piece of pizza, there was only 1% of space left in my stomach.

As you can see, our first night was a fantastic warm-up for the rest of the trip! Stay tuned.

So, in the past two weeks, I have had a new obsession.  A serious one this time.

It first started when Thanan and I made a spontaneous trip to Flushing because *he had never been!*  Can you believe that?  It's a travesty, if I ever heard one.

We headed out to Golden Mall to eat my beloved Lan Zhou noodles (with duck, o'course) 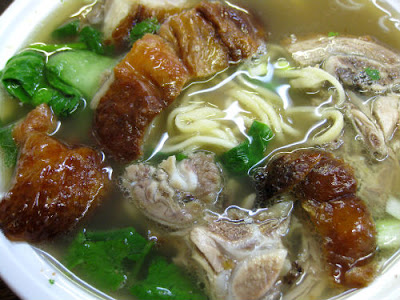 and then we decided to try out Xian Famous Foods.

From their website: "Situated in the western region of China rich in history, the ancient city of Xi'an is known as the first capital of China, and the resting place of the famous terra cotta soldiers. Having once been the starting point of the Silk Road, Xi'an celebrates its diversity and boasts a unique cuisine that may be best described as a fusion of Middle Eastern and Chinese foods."

I had tried it before with my old roommate, some cold skin noodles, which were good, but not instant love, since I personally prefer my noodles warm (and with meat, you know me!).  This time we decided to try out D1 - savory cumin lamb noodles, because there is nothing I love more in life than cumin seasoned lamb.

After that first introduction, Thanan and I cannot stop thinking about those ridiculously chewy noodles.  The beautifully spicy oils and
THAT LAMB.
Succulently flavored pieces of cumin infused lamb.  The things dreams are made of.  Yes, my dreams are made of lamb, don't be jealous!

Now, everytime I come back to New York, at least one of my meals has to be Xian.  Thankfully, Xian has gone viral since we discovered it; it has been featured on the Cooking channel, and also expanded into two other locations in Manhattan, one a subway stop away !!  One subway stop!

The St. Mark's location features two two-top tables and a handful of seats along the bar.  Most people grab the food to go, but I wanted to try the noodles and was fortunate that my prayers were answered in line as a seat cleared up right after I ordered.  Now that it's becoming more brisk outside, I decided to try the savory lamb noodles in soup (I love how versatile these noodles are!).

Even after eating it last night, I can still eat another bowlful.  It's an infatuation.  I can't kick it!  I am totally eating it again today.  Aaah!

Ahh!  Oh the time!  I've been traveling to Dallas for a bit of late, and Diana and I also took a lovely jaunt to the Northwest to eat our stomachs out (food babies left and right!), hence the sad recent silence.

I finally made it back to NYC and managed to grab some new eats!

My new-new favorite is a spot I had always passed by when walking near Madison Square Park and noted because the window had my initials!

By the next morning, as I was headed to the airport back to Kansas City, I was still thinking about that unbelievably juicy thigh from Hill Country.  I still think about it now.  I am obsessed!  Sure the chicken is pricey, but it's really worth it!  I am definitely heading back there my next weekend in New York; I gotta try their pie shake, a milkshake made with their pie of the day.  Oh, be still my heart!