If there's anything that I never thought I would love, it would be vegetarian Korean.  I mean, what could be more delicious than impeccably marinated beef shortribs grilled over openflame?

But now I question everything I once knew about the world after I have fallen head over heels in love with Hangawi - an incredibly warm restaurant in K-town that is so perfect for dates (take off your shoes, slip into these little wooden bunkers under soft candlelight!) and anyone who would appreciate good ol' fashioned adorableness. Greeshma and Diana came off the Boston bus, and we bee-lined for Hangawi for their last seating at 10:45p.  To satiate their raging hunger, we shared the following:

The most amazing ginger iced tea you will ever have served in the most rustically crafted ceramic cups.  The spice from each sip will burn your throat in the very best way. 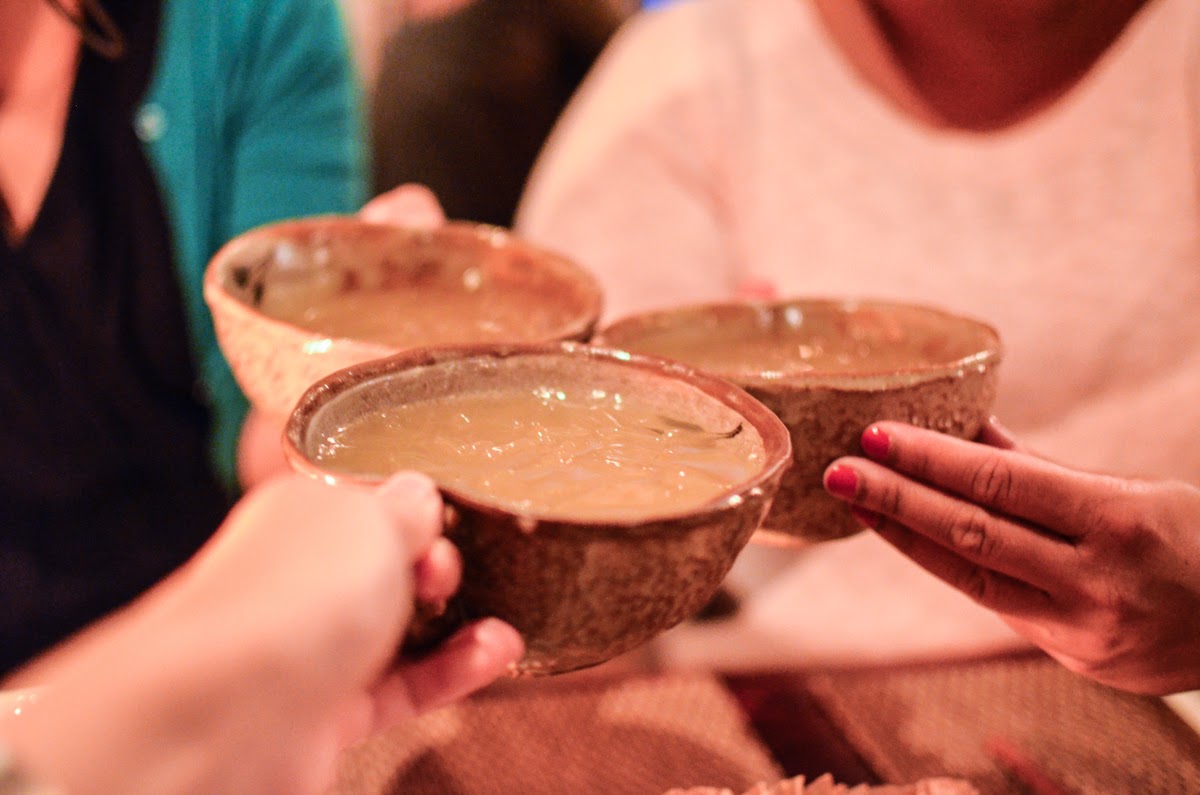 Jap chae, bundled into parchment paper and cut open at your table, releasing the aromatic steam into the heavens. 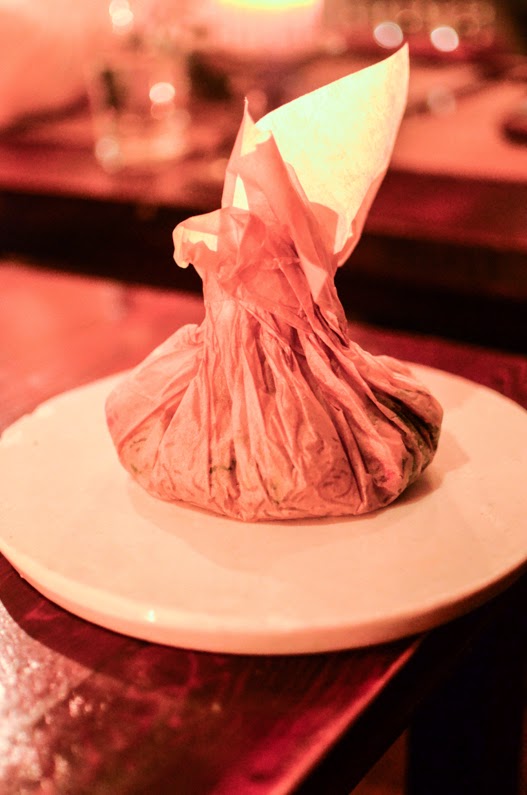 Inside the paper package are lovely strands of clear noodles, lightly seasoned to perfection, tangled with mushrooms and vegetables. 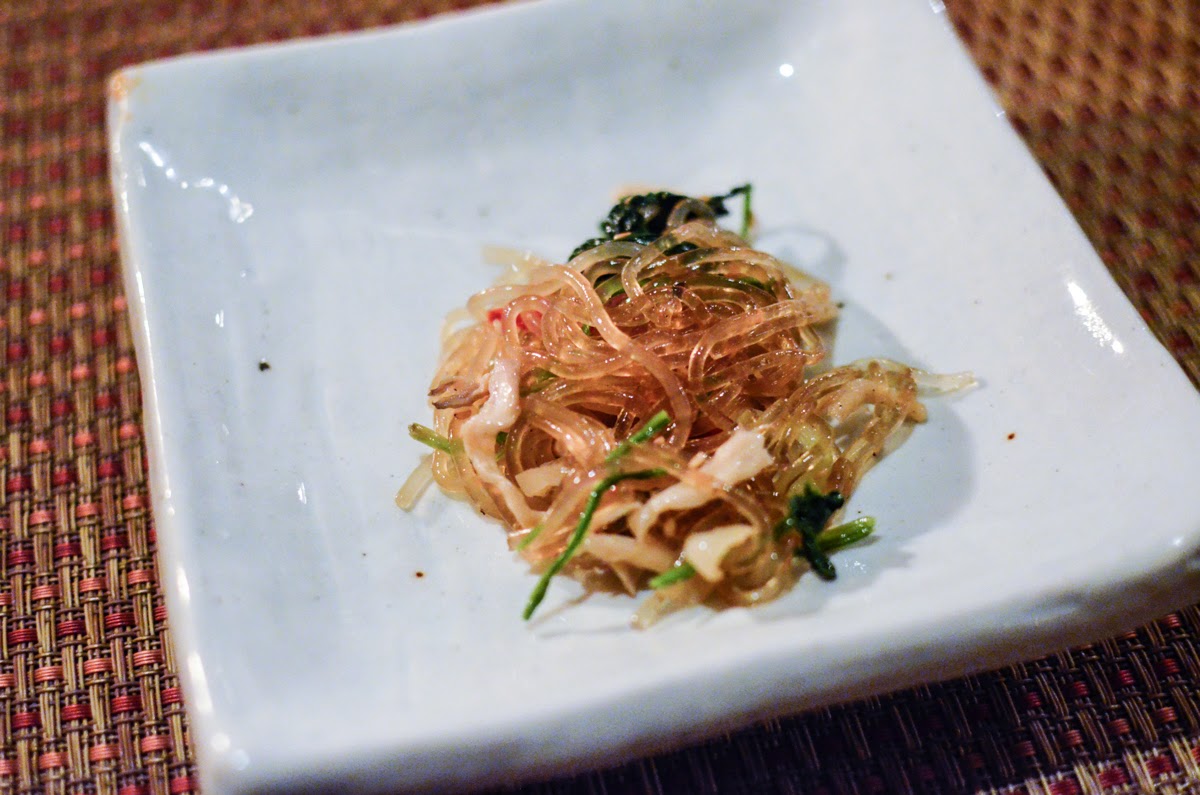 Wedges of kimchee are served at the table to nibble in between plates. 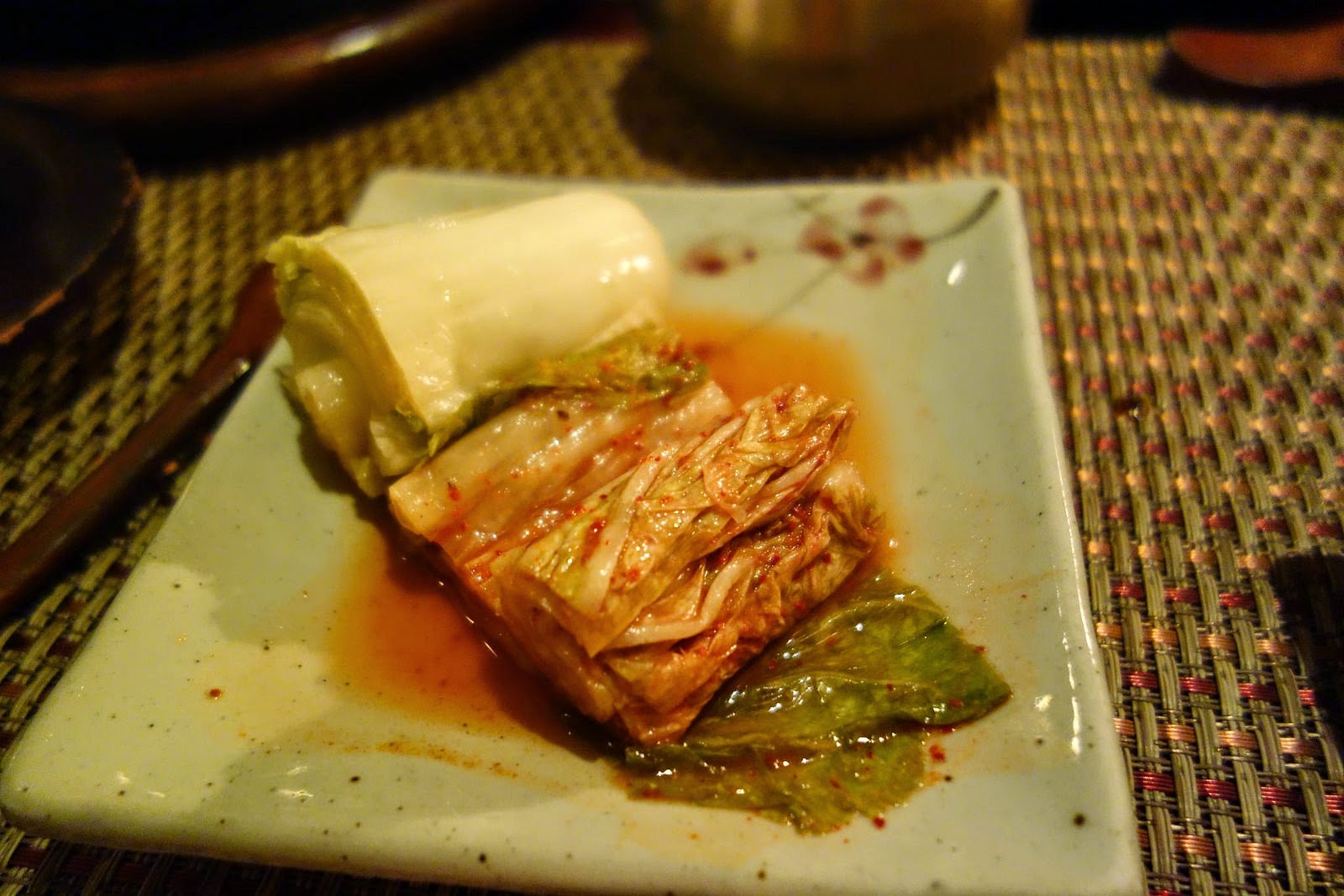 Black sesame soup which is so thick both in texture and black sesame flavor - hard to eat more than a few spoonfuls, so best to share if you want to try it. 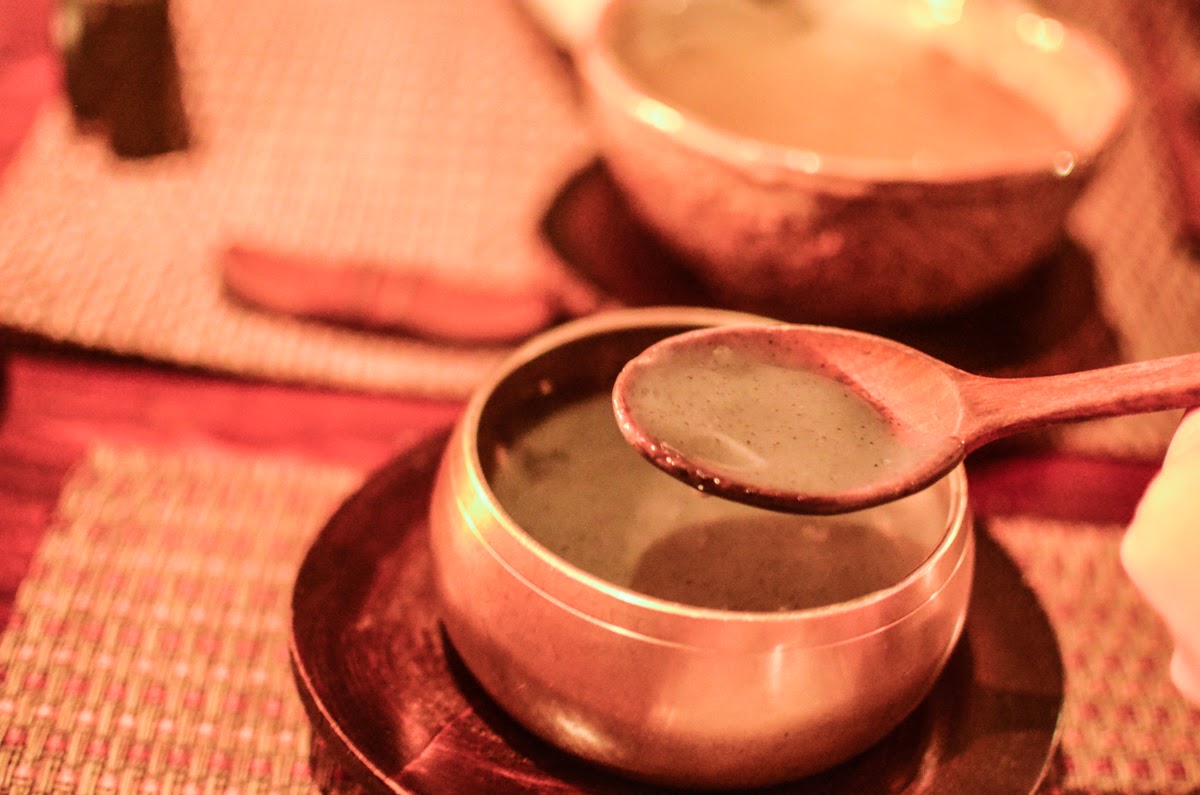 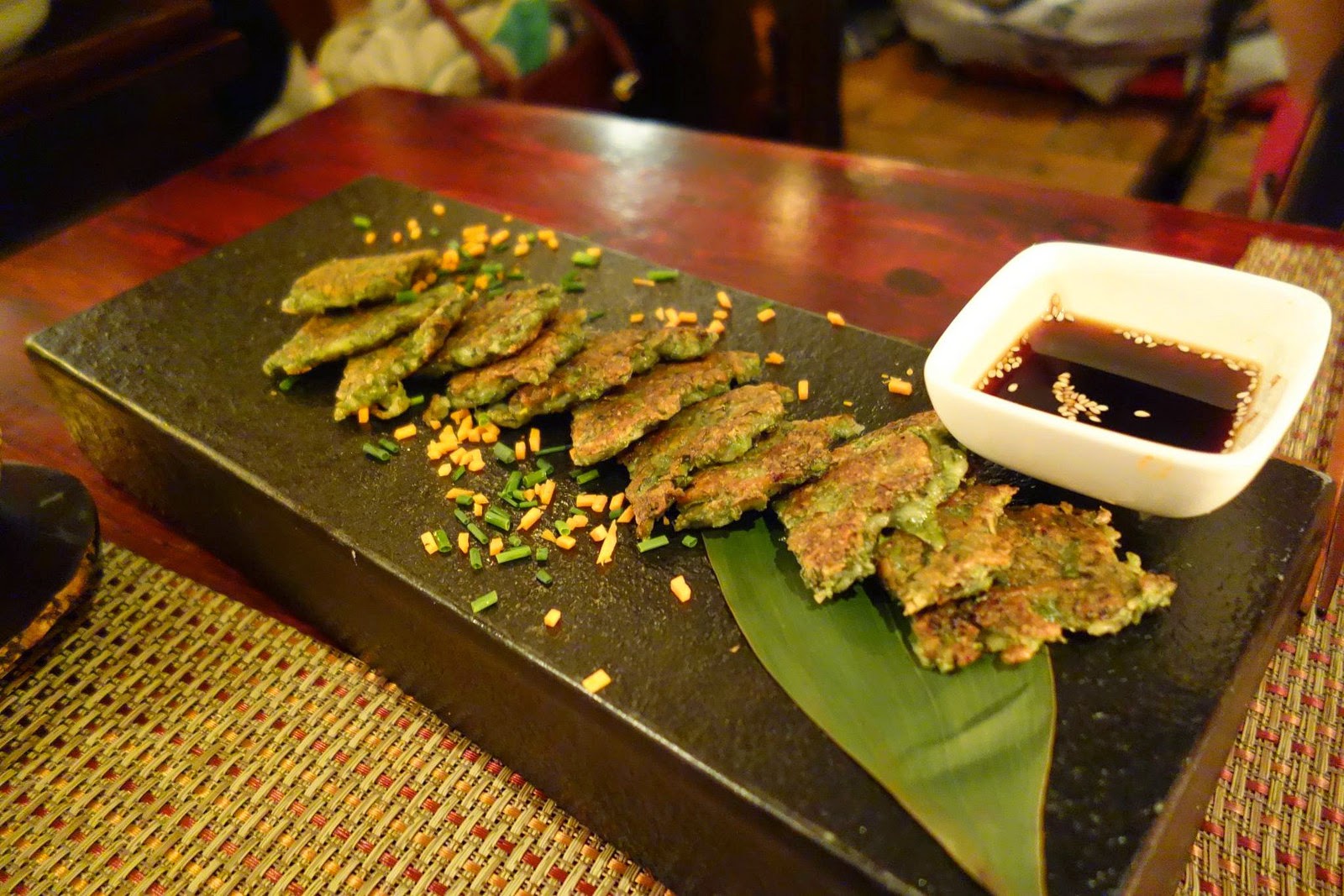 So addictively crispy and probably very healthy - it has the words kale and organic in it right? 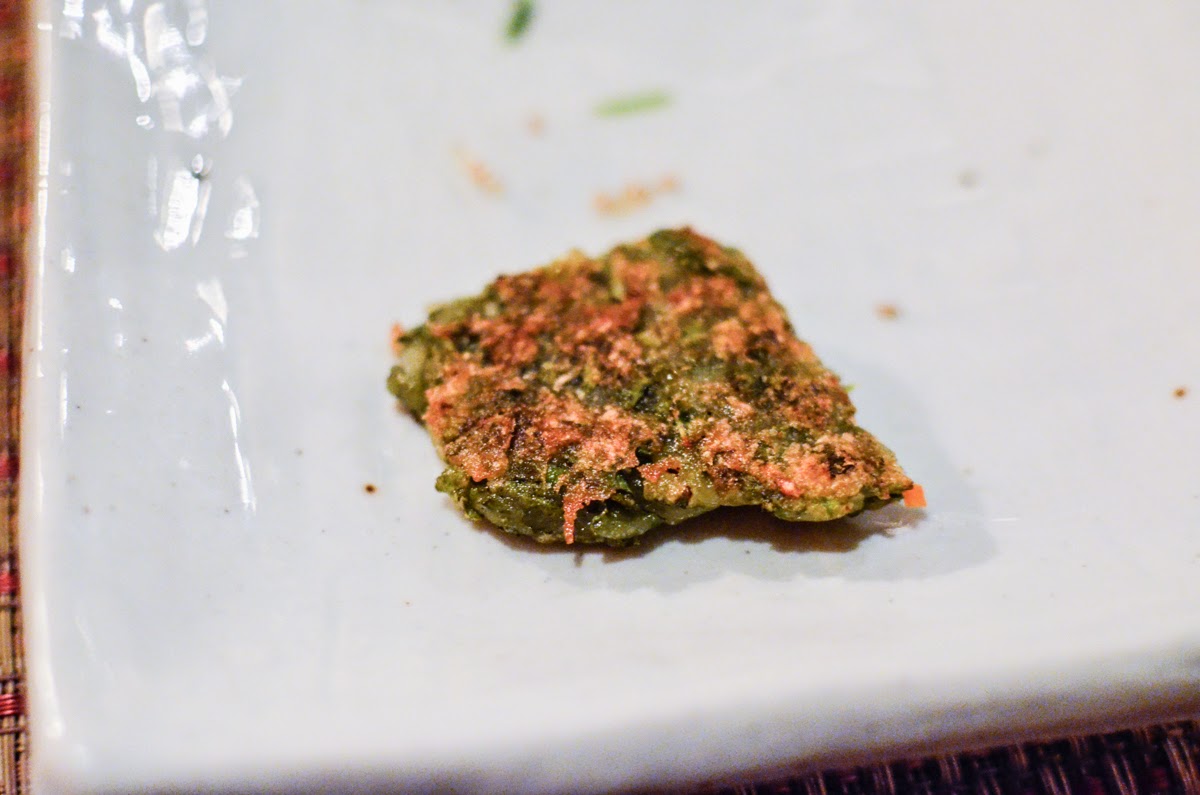 It was Matsutake mushroom season when we visited which meant an inaugural return of the king of mushrooms.The mushrooms grow at the base of pine trees in the mountains of Korea.

It is because they are so coveted that this plate of mushrooms cost $32.  Without a doubt, one of the most expensive mushroom dishes I have ever had, but they were nicely cooked with tender chew, tossed with eggplant and soy ginger paste sauce. 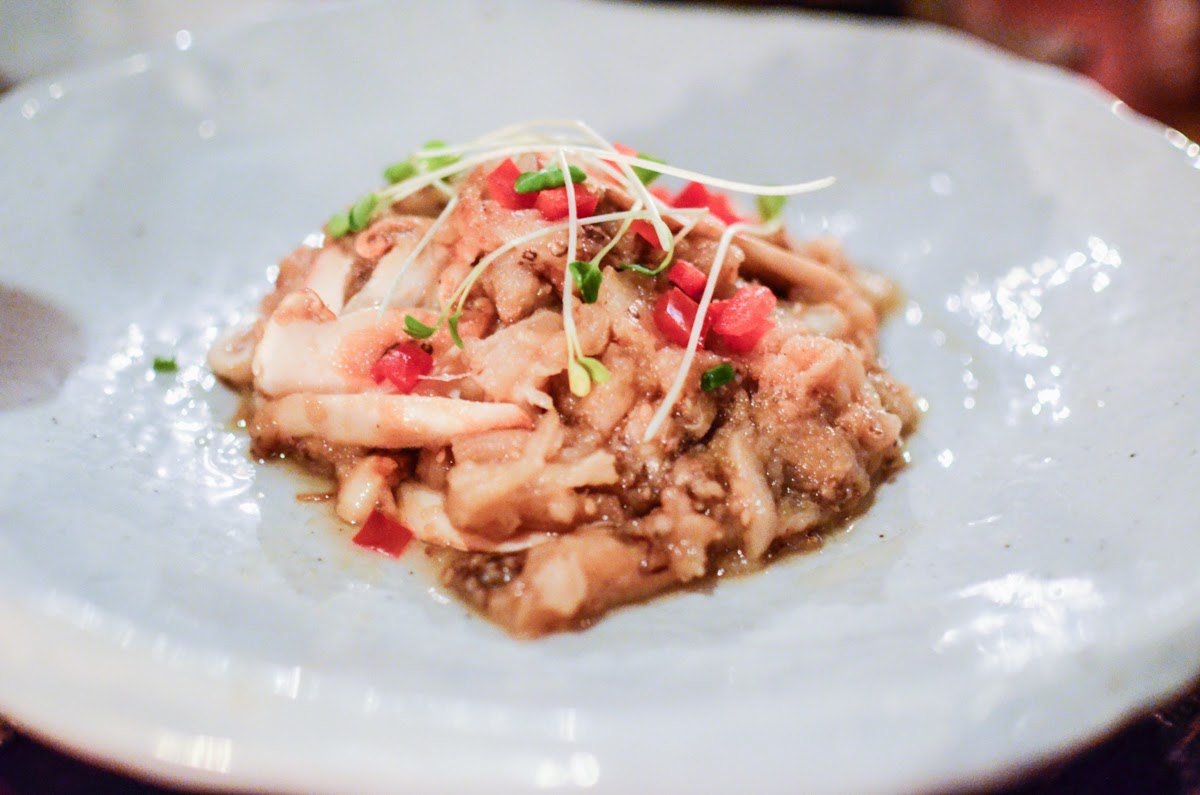 One of my favorite dishes at Hangawi is the tofu steak, which doesn't sound particularly amazing, but slabs of tender tofu come sizzling on this stone plate, drenched in the most unctious, flavorful, gingeriffic, tangy thick sauce that you must coat every piece of tofu and scrape off into your bowl of fluffy steamed rice. 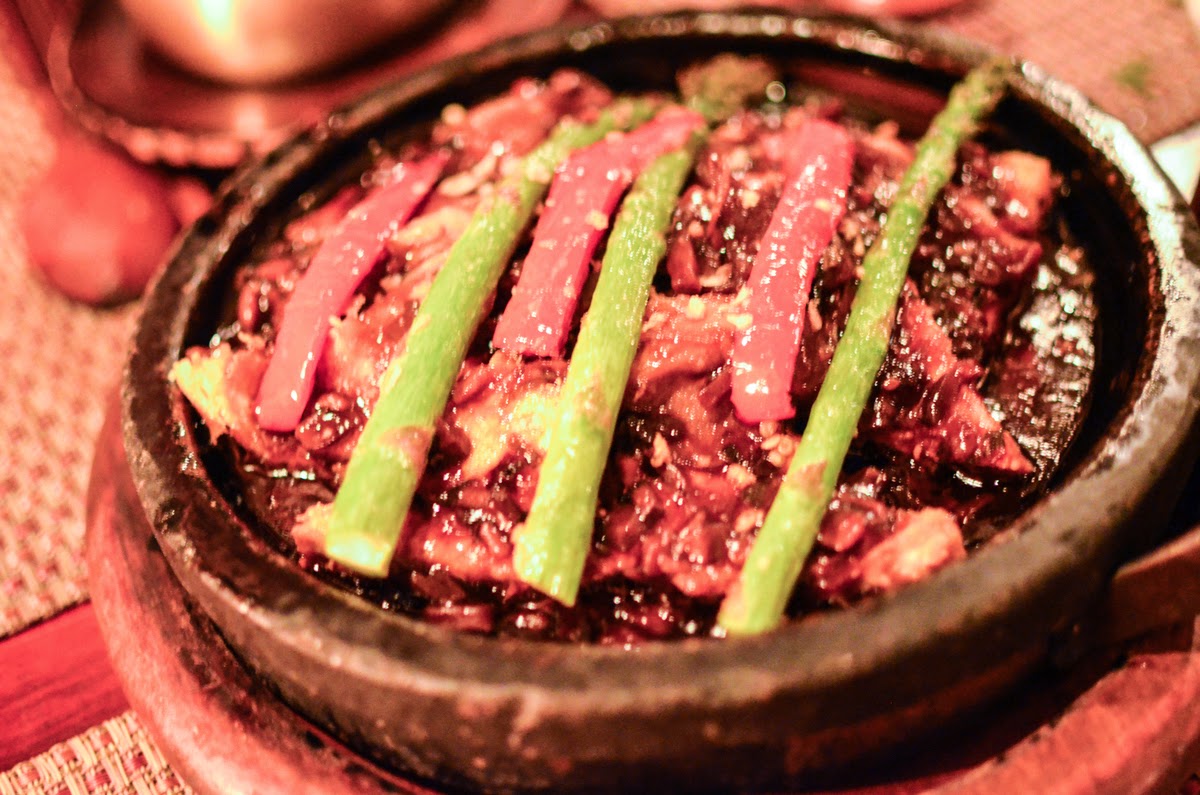 I would eat my hand if it was covered in this sauce. 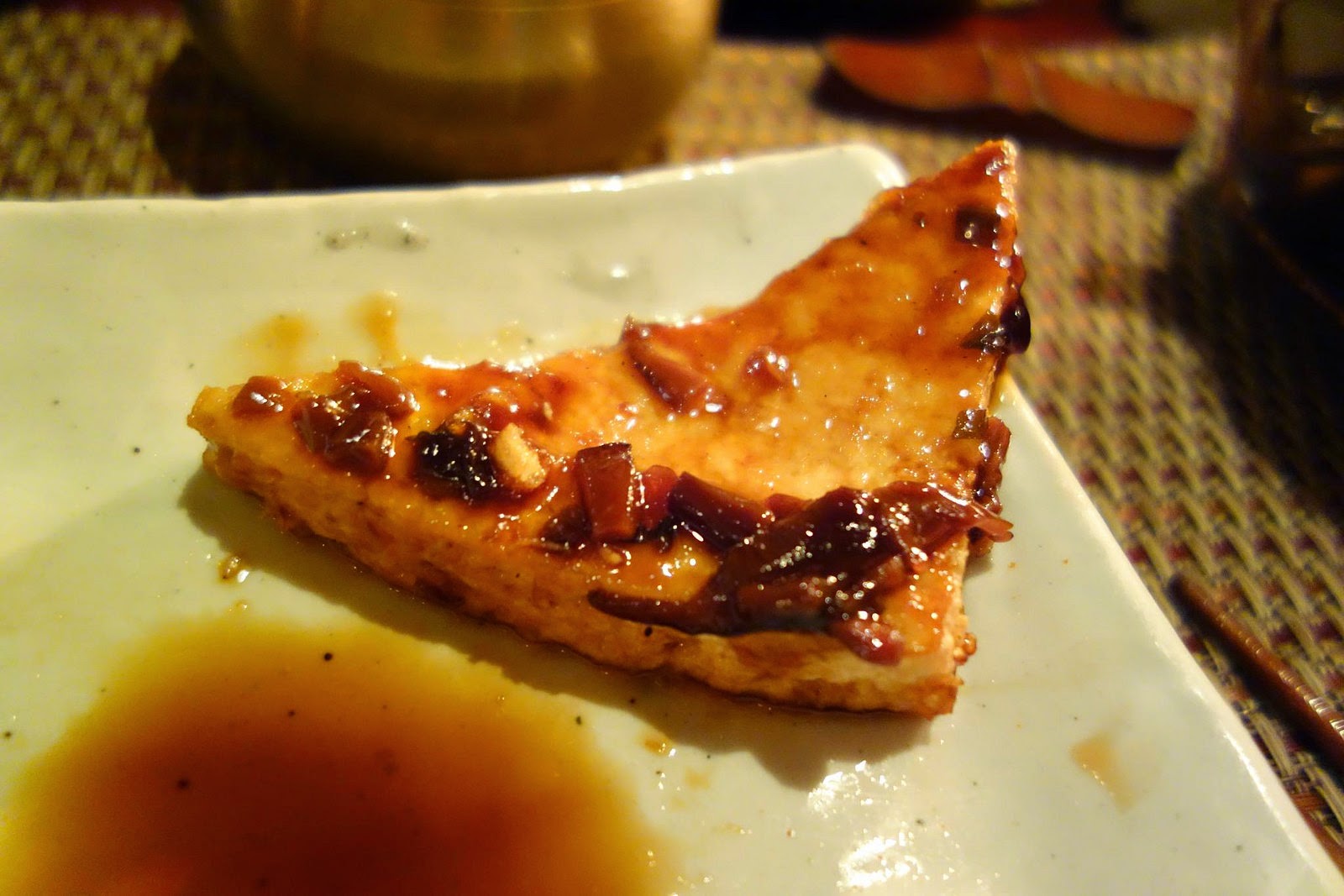 For dessert, I would skip Hangawi and head to Grace Street (to be another post), but they do have a few offerings here - all which are vegan and dairy-free.

We had the chocolate tofu pudding that I know people claim tastes just like pudding, but it really doesn't.  It's not terrible, but it's not great. 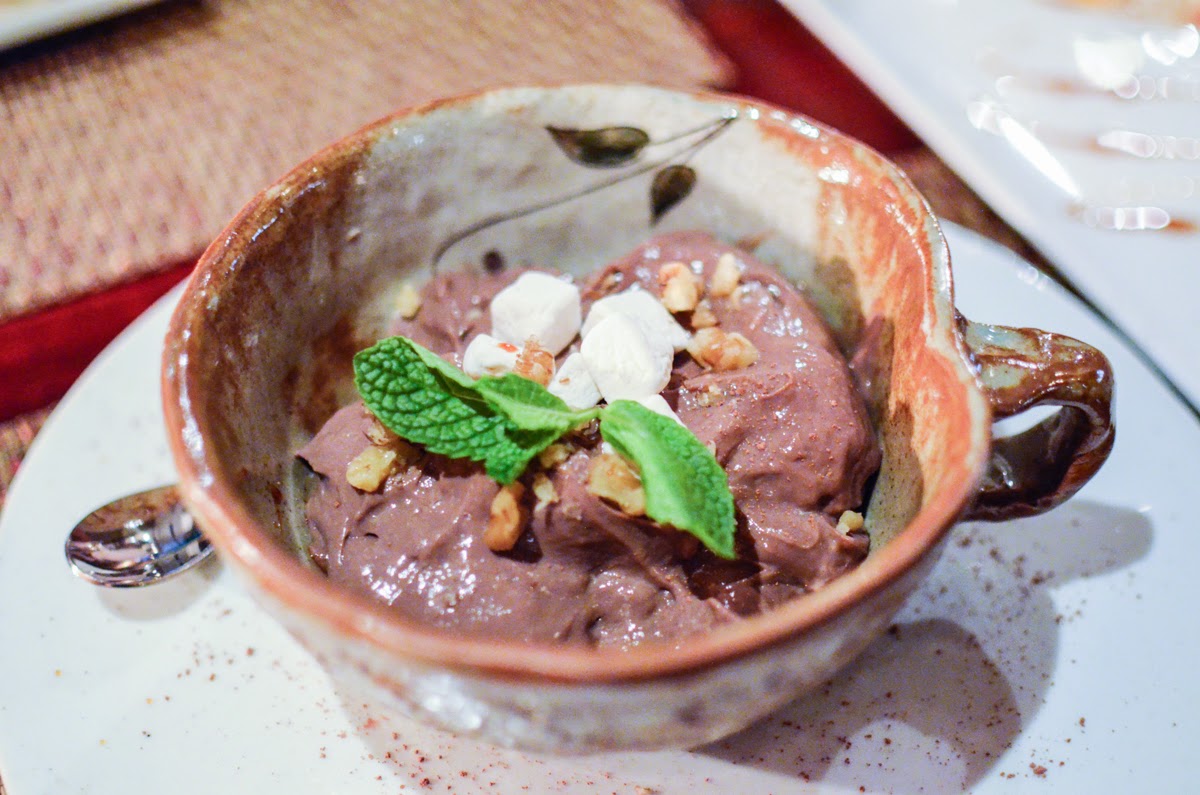 The blueberry coconut cake was a bit on the drier side, and though the flavor was good, the texture was also a little strange.  It just made me miss real cake. 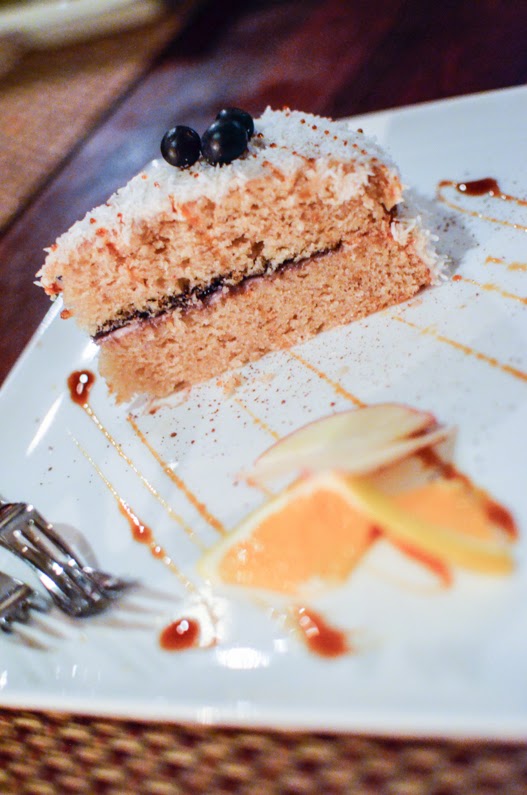 However, the amount of which we enjoyed the rest of meal more than compensated for the less than stellar desserts, so all you meat-eaters, take a chance, and romance your man or lady here soon !

Han's Nonsensical Rating: I crave the ginger tea here about every day, and think about the jap chae and tofu steak just as much - definite recommend for one of the more unique restaurants in New York and K-town!

I blame holidays.  Working in Buffalo.  And.  Good ol' laziness.

To be honest, I am not sure if anyone reads this anymore, which is sad.  Because no one will see the glory of the brunch at Root & Bone.

A few months after my initial enamoration with the restaurant, Diana and Greeshma came through New York, and we shared my current favorite fried chicken along with half of the rest of the brunch menu.

I am so glad we went.  It was even better than I had remembered. 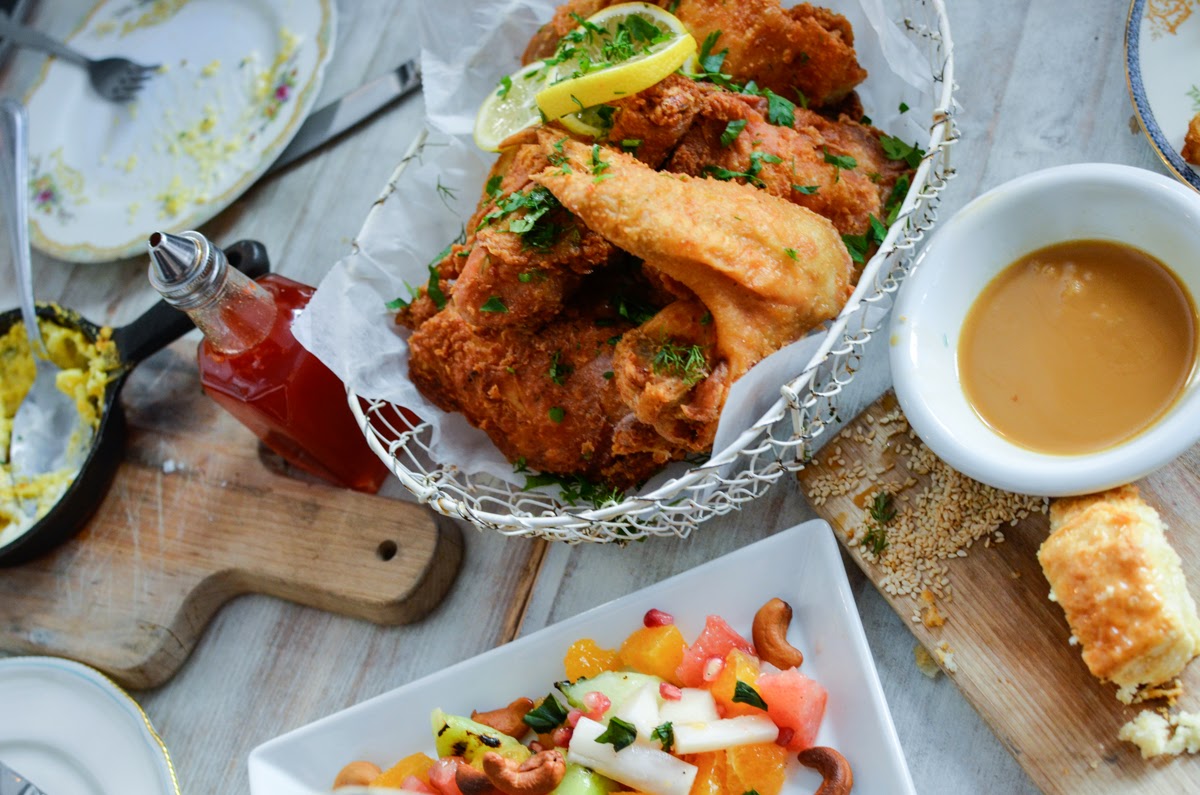 One of the most amazing things we discovered is the beauty of the gooey cheesy corn bread.  It comes overflowing in this freakishly adorable cast iron skillet. 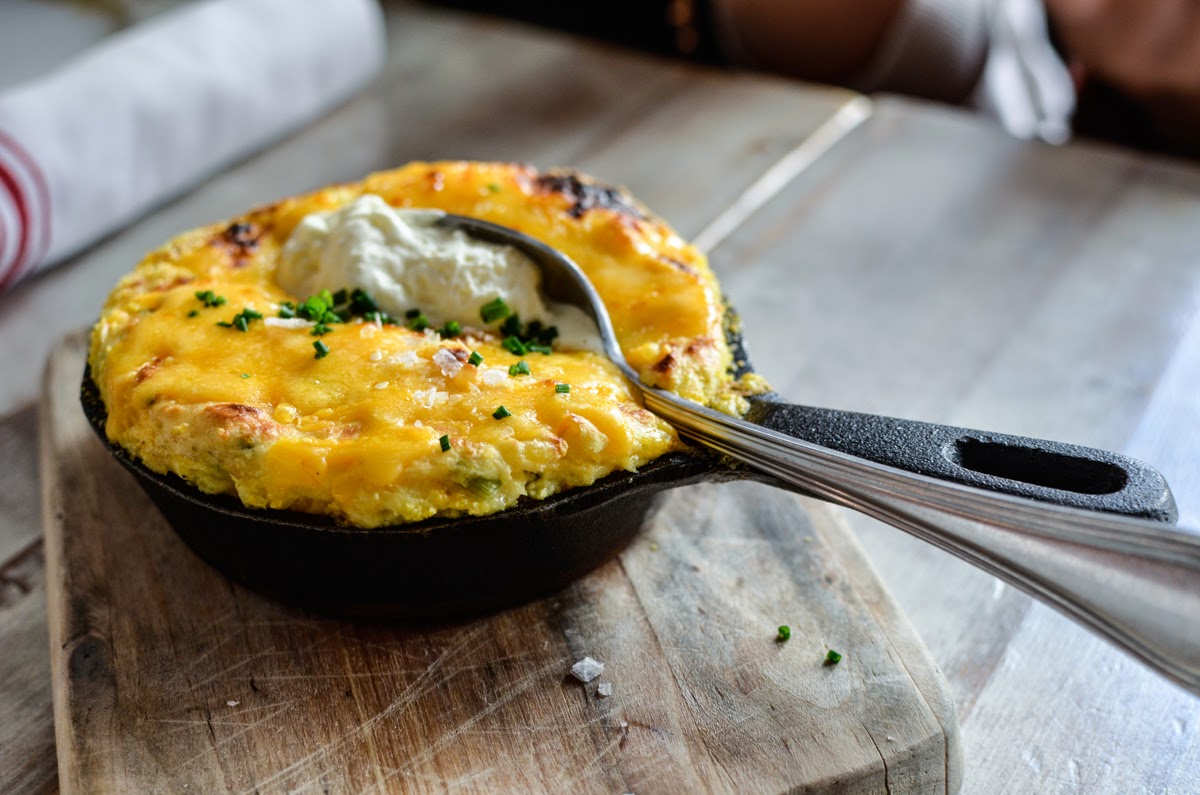 Each spoonful elicits moans of pleasure - tang from the buttermilk whip and cheddar and sweetened with fresh corn niblets - the result just creamy wonder. 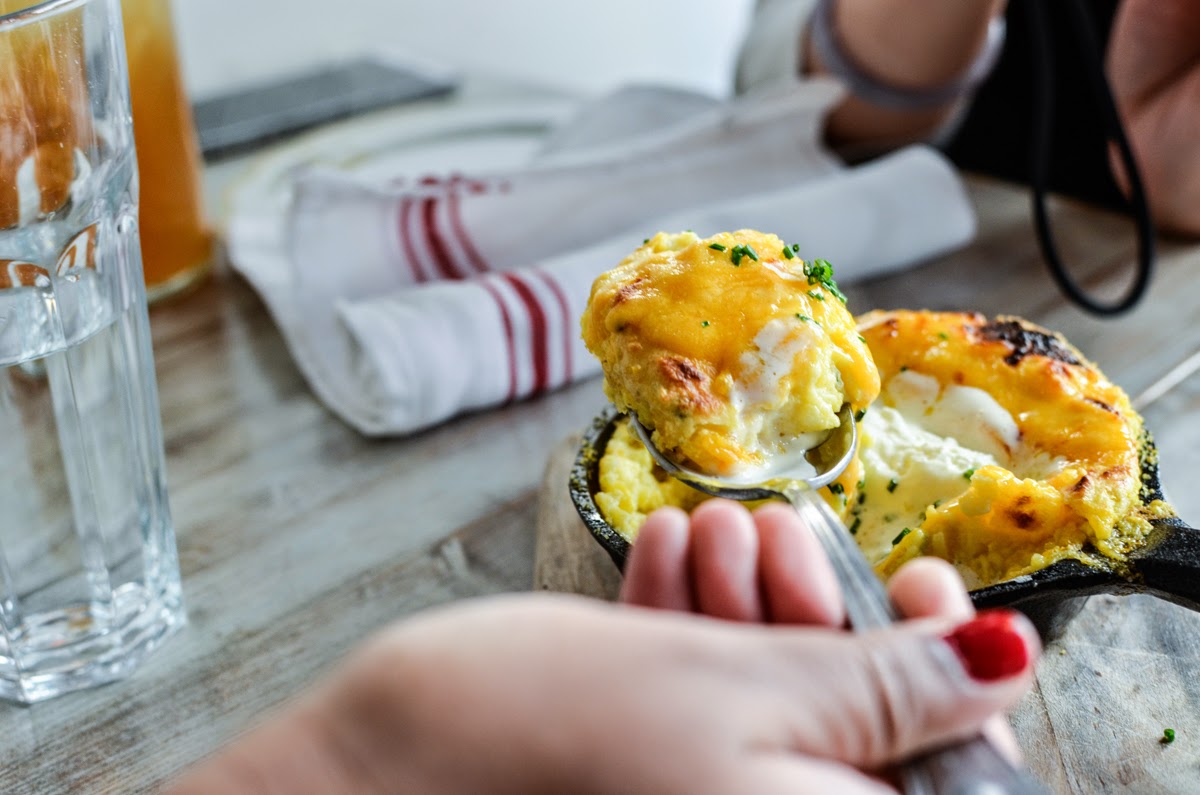 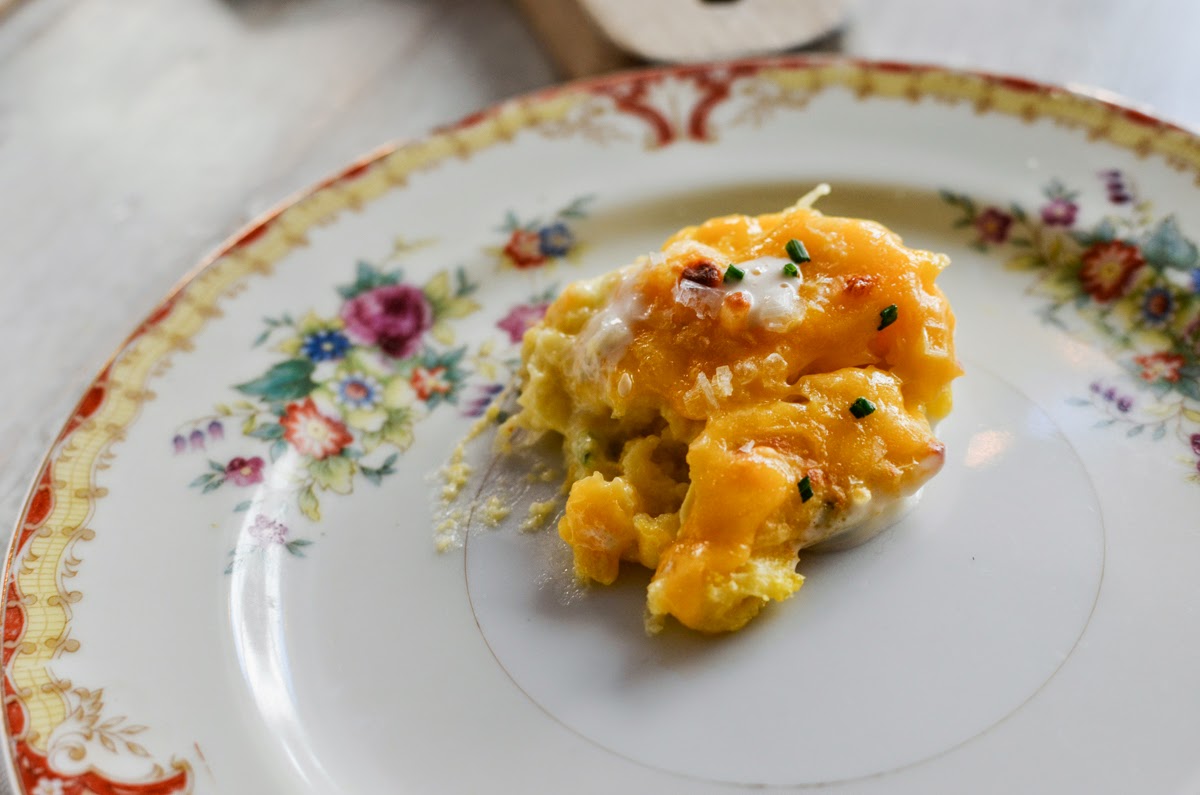 The biscuits were remarkably improved since my first visit, golden and gorgeous, 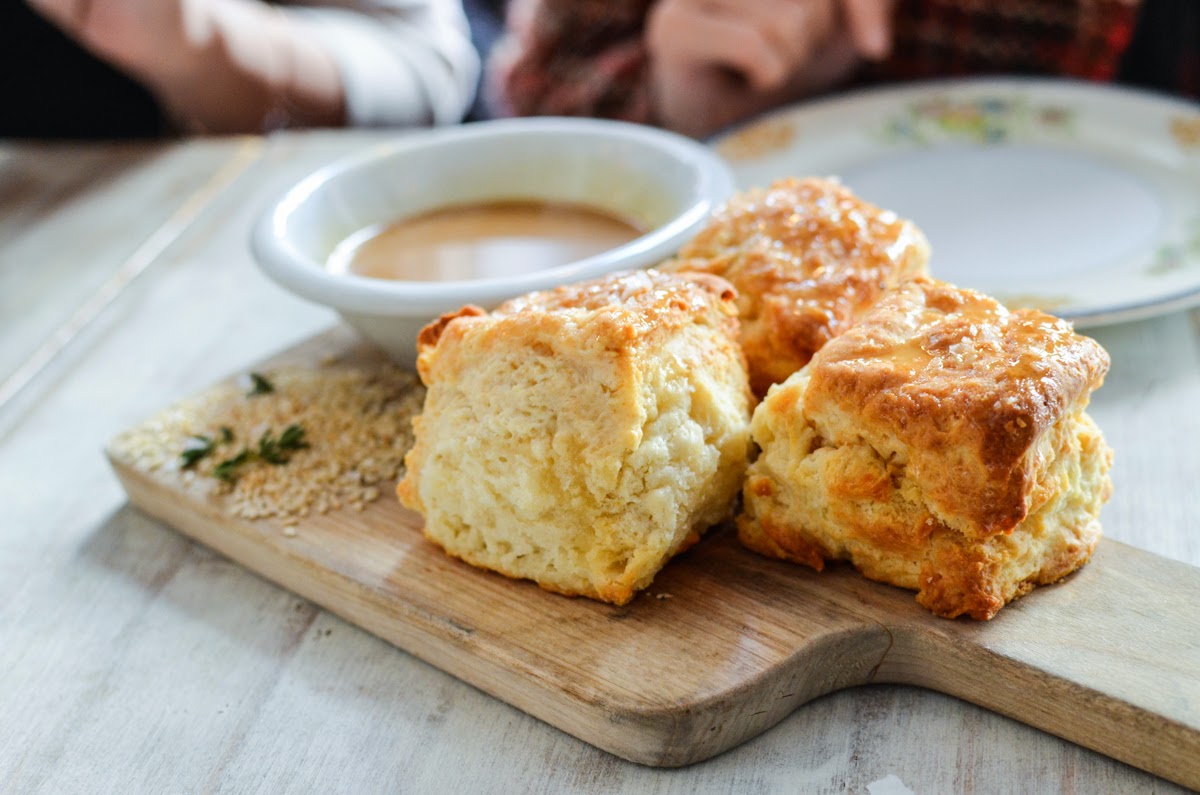 with beautifully tender interior, perfect for sopping up that chicken au jus and toasted sesame seeds. 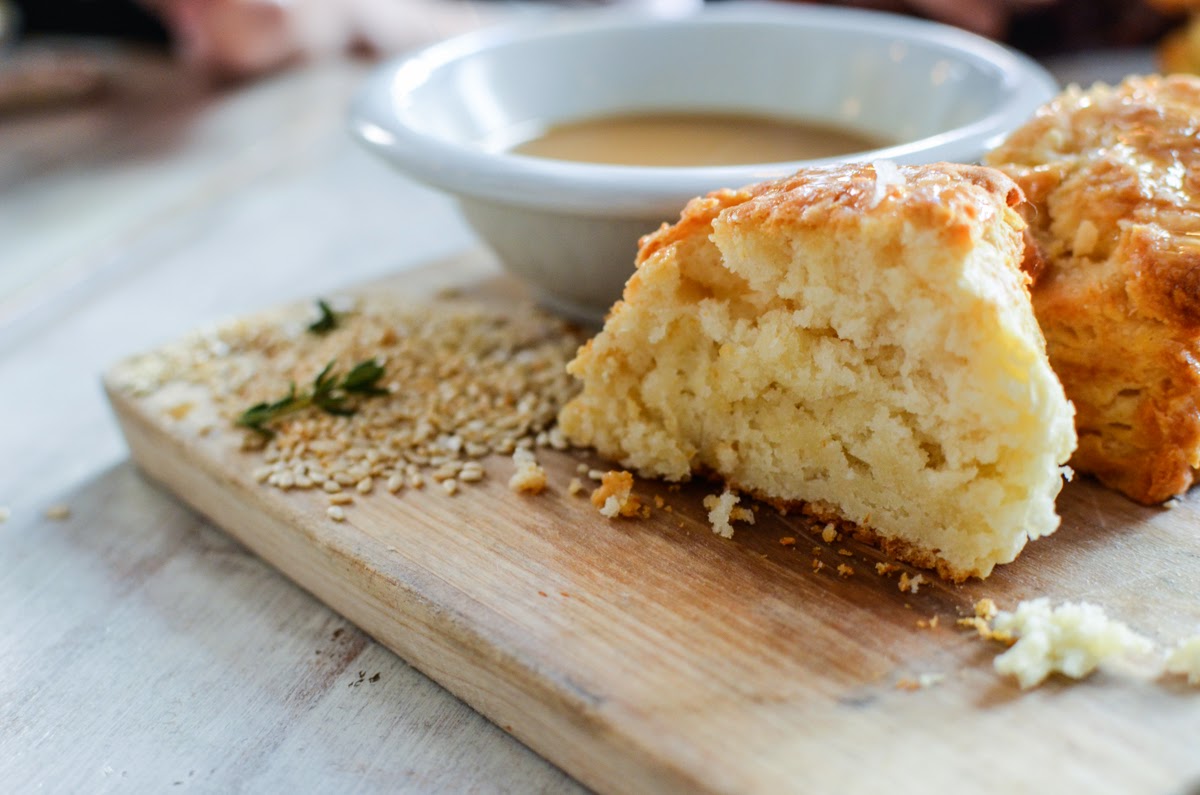 The winter citrus and melon salad was beautiful - chunks of grapefruit, orange and tangerine tossed with melon and snips of basil.  The acidity chosen carefully to cut 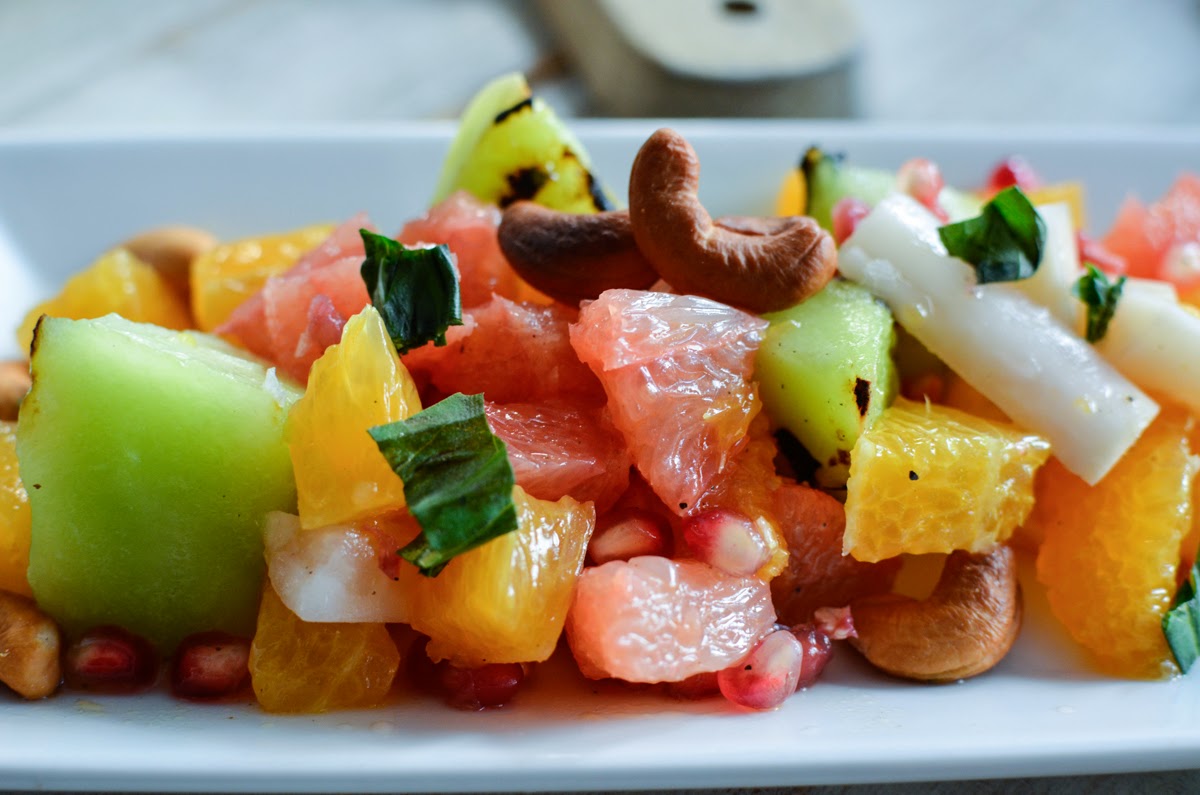 the fat from the awesomely tender bacon drizzled with maple syrup.  Thick, salty and sweet.  Delicious. 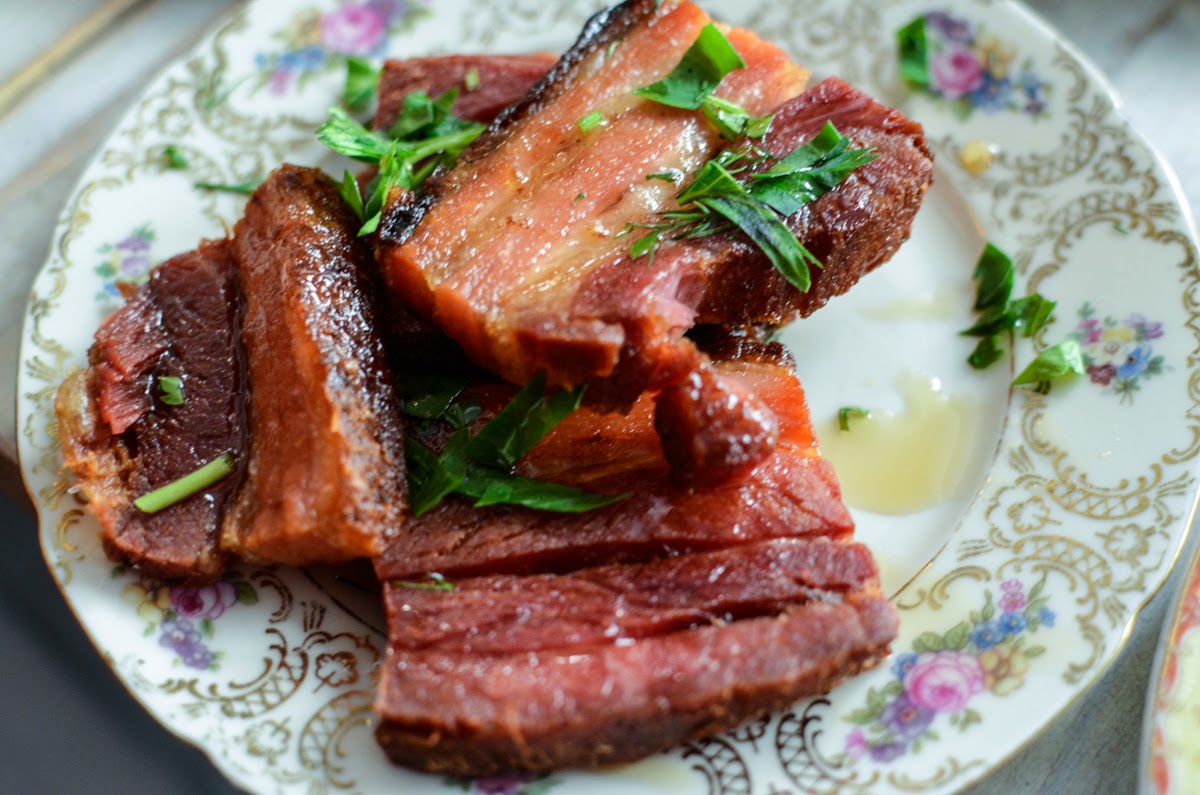 We shared a basket of fried chicken among the four of us which was plenty, 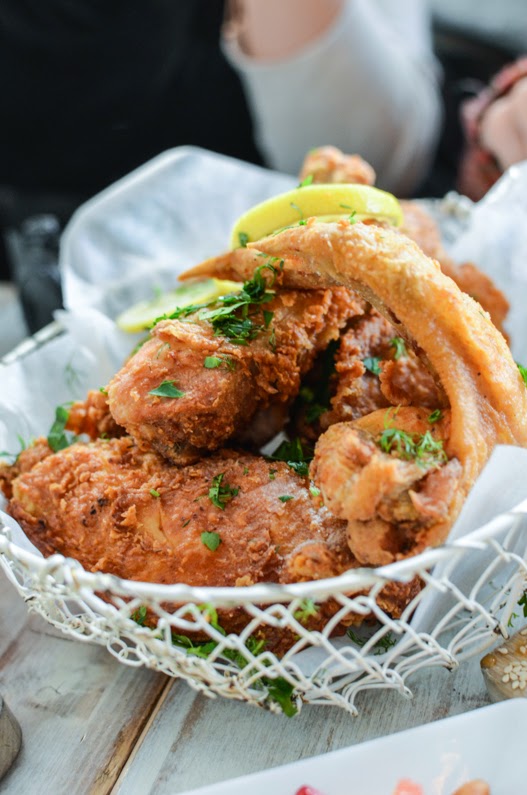 though the thighs remain the absolute best cut and would just recommend getting an entire basket of thighs if you could - such flavorful succulence with every bite ! 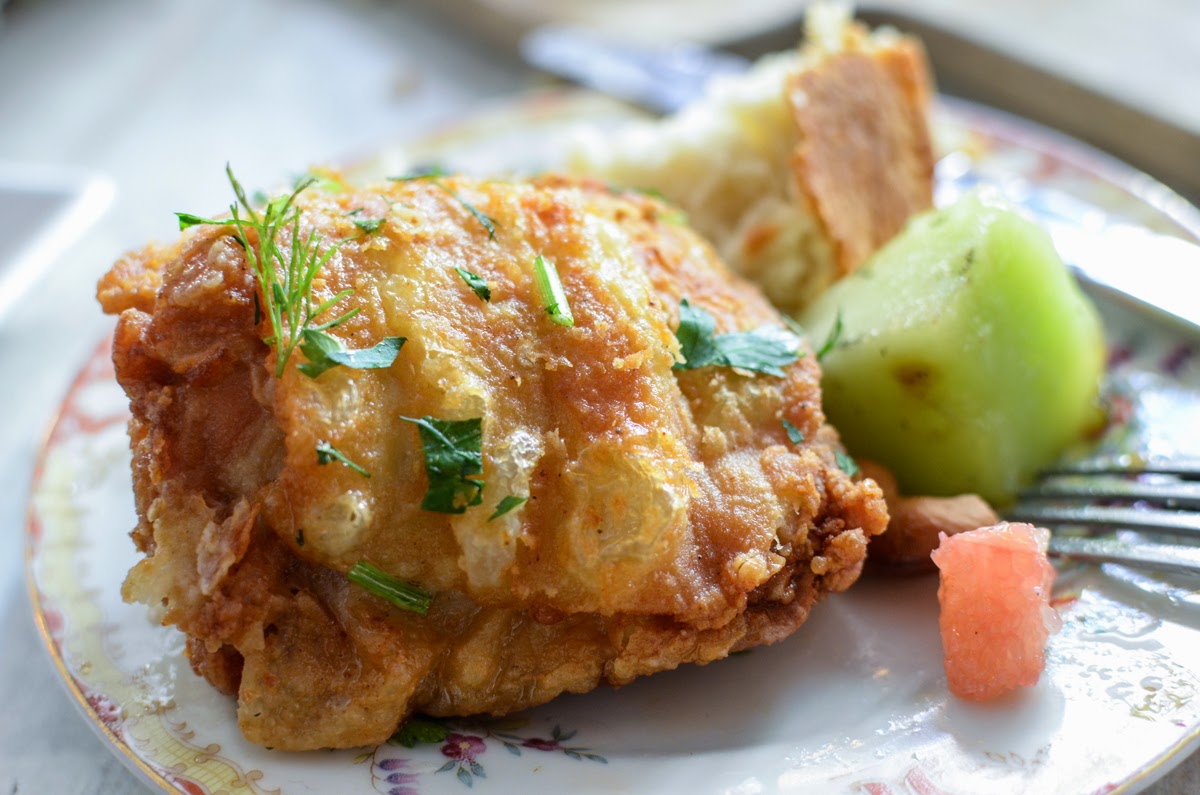 We also checked out their desserts for your sake, and can confidently confirm that they are amazing.  The chocolate pecan pie is served warm, and is studded with huge pecans and just enough chocolatey goo to keep the whole pie together. My hands-down favorite was the toffee pudding with its praline ice cream.  Just look at it.  It's swimming in caramel, the pudding is warm and melts in your mouth, and there's nothing else you can really want after this except a nap. 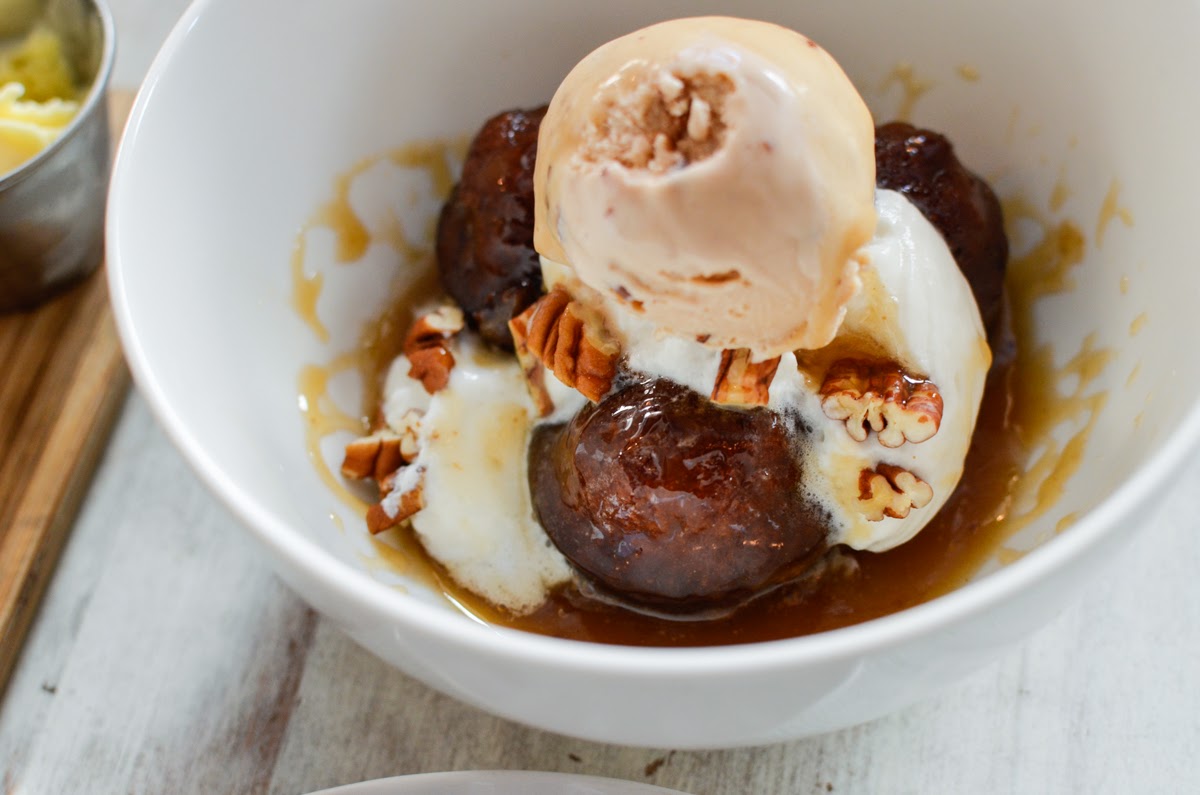 Han's Nonsensical Rating: One of my favoritest brunches ever in all of New York.  Just get everything and love yourself and the new food baby you'll conceive afterwards.