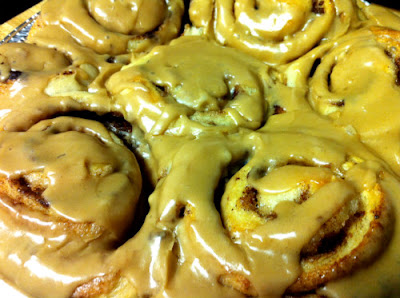 As you can see from our blog, I eat a whole lot more than I can cook, but I am trying to change that.  Pictorial sites like The Pioneer Woman are a godsend to me as I never know what anything is supposed to look like at any stage in a recipe.  I have been staring at Ree Drummond's cinnamon buns for over a year, and while that may sound completely innappropriate, take a glimpse and you will be instantly enamored too.

Finally, I decided to ring in the New Year by tackling my greatest fear (dough) and conquering this sucker once and for all.  And I will tell you that the cinnamon rolls are as good as she claims.  And the recipe is really easy!  Aaaand everything was mixed by hand in a single bowl.  It can't get any better than that.

Here are some of my pics (hers are a bajillion times better, but mine are well-intentioned!) and commentary: 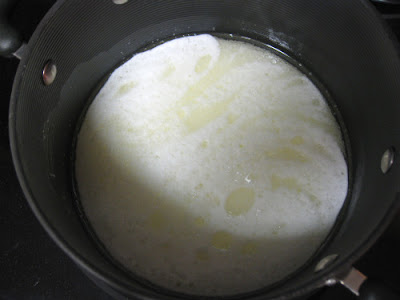 The most nerve-wracking part for me was scalding the milk-oil-butter in a saucepan, because fears of just plain scorching milk haunts me, but it wasn't as bad as I thought it would be!  I just simmered the wet ingredients until it reached about 185 degrees and had tiny bubbles at the perimeter where the liquid meets the pan.  Phew.

I made the dough the night before, covered it with cling wrap, and continued the cinnamon rolling the night after.  Can I tell you that one of my most favorite things in life is punching down the overflowing rising dough in the bowl?  It's the absolute best.  Maybe I have some scary pent-up anger issues.  It's seriously fun though.


We made the frosting as Pioneer Woman prescribed with coffee + maple flavoring.  It is a bizarre combo. We were nervous about it.  We tasted it after we mixed it, crinkled our noses and still weren't sure if we liked it.  We closed our eyes and smothered the hot rolls with the icing all the same with full faith in the Pioneer Woman!


1. Mix milk, vegetable oil, and sugar in a pan (large soup-pot type). "Scald" the mixture (heat until just before the boiling point.) Turn off heat and leave to cool 45 minutes to 1 hour.


2. When the mixture is lukewarm to warm, but NOT hot, sprinkle in yeast. Let this sit for a minute so the yeast gets all warm and moist and happy. Then add 8 cups of all-purpose flour. Stir mixture together. Cover and let sit for at least an hour.

3. Now add 1 more cup of flour, baking powder, baking soda, and salt. Stir mixture together. At this point, you could cover the dough and put it in the fridge until you need it?overnight or even a day or two, if necessary. Just keep your eye on it and if it starts to splurge out of the pan, just punch it down. Or, of course, you can just go ahead and make the rolls. Let?s do that, shall we?.

4. Sprinkle surface generously with flour. Take half the dough and form a rough rectangle. Then roll the dough thin, maintaining a general rectangular shape. Rectangle should increase in both width and length as you roll it out.

5. Now drizzle melted butter over the dough. Don?t be shy; lay it on thick, baby. You know you want it. Oh, by the way? This is not non-caloric. In case anyone asks. Sprinkle sugar over the butter, followed by a generous sprinkling of cinnamon.

6. Starting at the opposite end, begin rolling the dough in a neat line toward you. Keep the roll relatively tight as you go. Some of the butter / sugar / cinnamon mixture may ooze out toward the end, but that?s no big deal. Next, pinch the seam to the roll to seal it.

7. Spread 1 tablespoon of melted butter in seven round, foil cake or pie pans. Then begin cutting rolls approximately 3/4 to 1 inch thick and laying them in the buttered pans. Repeat this process with the other half of the dough. This recipe makes approximately seven pans of rolls (56 rolls).

9 While the rolls are in the oven, make the deliciously sinful maple frosting. To a mixing bowl, add powdered sugar, maple flavoring, 1/2 cup milk, 1/4 cup melted butter, brewed coffee, and salt. Stir until mixture is thick but pourable. Taste and adjust as needed.

10 Generously drizzle frosting over warm rolls after you pull them out of the oven. And take a walk on the wild side. Don?t be afraid to drown them puppies. Be sure to get frosting around the perimeter of the pan, too, so the icing will coat the outside of the rolls
by han