New York was so ready for Pok Pok.  Open only since Wednesday, waits were already over an hour long by 6:30p (the restaurant opens at 6p).  New Yorkers really want their Thai and Southeast Asian-inspired cuisine. 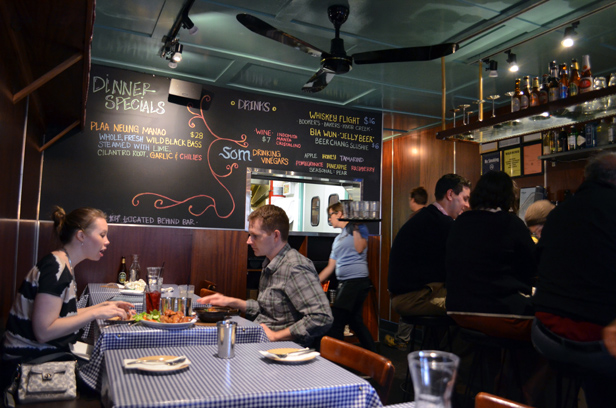 Diana and I had eaten at the original Pok Pok in Portland, and though that was just a little over a year ago, it feels much, much longer, and I was totally game to relive the memories with Anne during the restaurant's opening week.  You can tell she was totally game too (especially after a few Changs)! 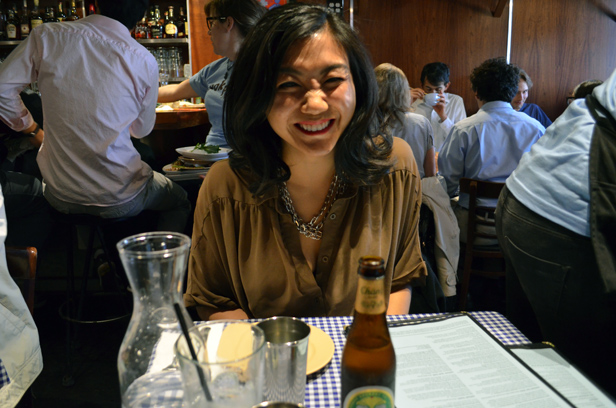 With little productivity made on a Friday, we had both decided long before our arrival the dishes we wanted to eat: 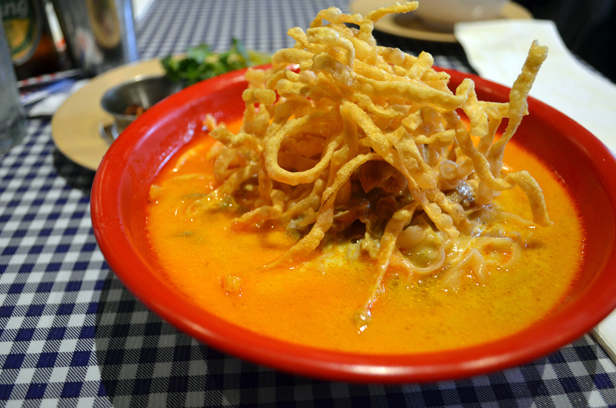 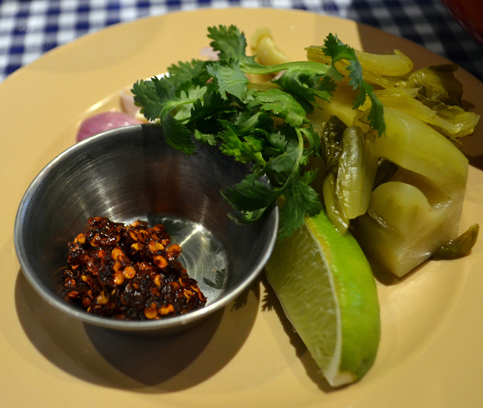 To me, this dish tasted exactly like ca ri ga, a Vietnamese yellow curry chicken dish, and like it had just come from my mom's kitchen (an equally magical place).   The coconut milk was balanced and not too heavy, the dish slightly sweet but quite savory, and the chicken absolutely tender.  I snagged a few pieces of stray chicken skin when Anne was not looking (delightful).  A very enjoyable and homey dish, but Anne and I both agreed, the spice factor of this soup could have been punched way up. 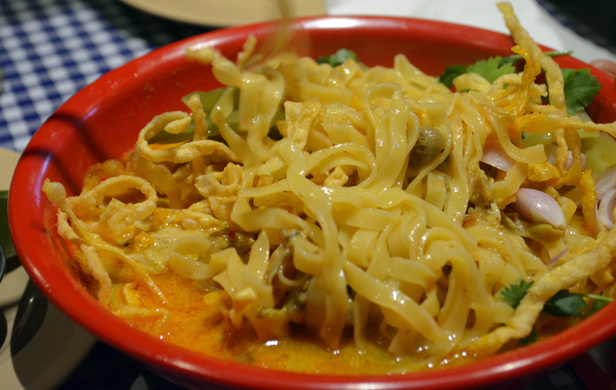 Mid-meal, Anne had a present for me. 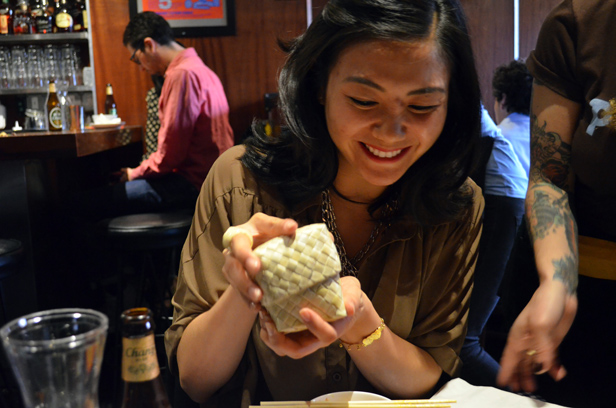 Sticky rice !  Aww, I've always wanted that...and the guy in the pink shirt looks like he wants it even more. 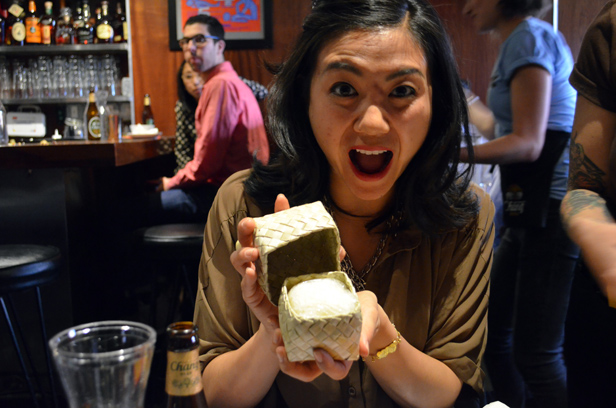 Every table had a plate of the infamous Pok Pok wings, and we also could not resist the siren call of the gorgeously glazed, spicy wings.  Sticky with an amazing caramelized palm sugar crust and tangs of fish sauce and chili flakes...it's pretty spectacular. 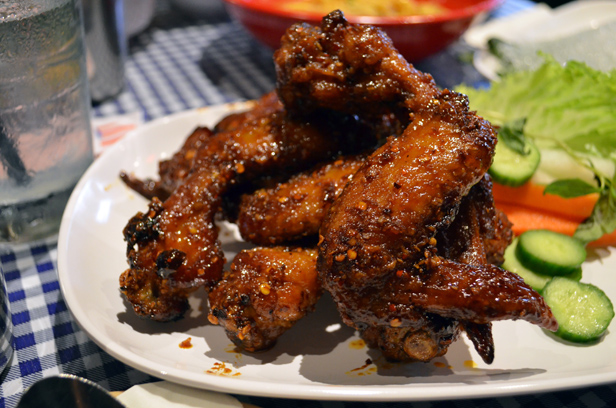 A plate of Muu Kham Waan, charcoal-grilled pork neck, was served in an exceptionally tangy, addictive garlic / lime / chili sauce and fresh cilantro was our hands-down favorite dish on the table. 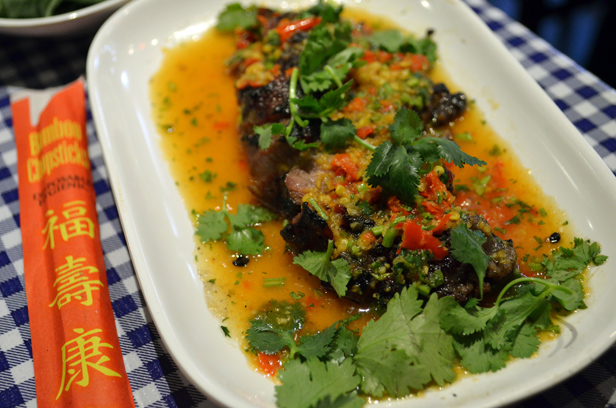 As with the flank steak we had last year, this dish was also served with iced mustard greens that cut the tart dish's spiciness with a burst of fresh, crisp flavor. 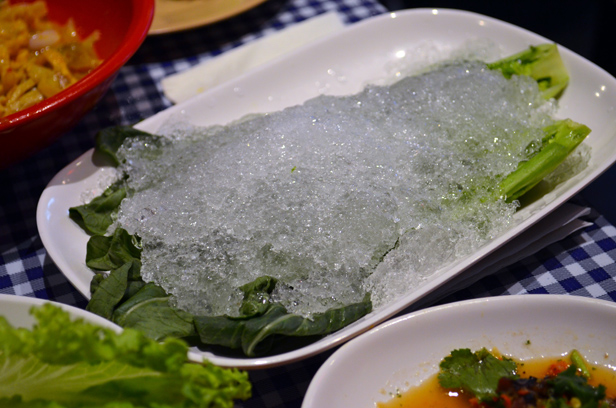 I am not sure if I have ever consciously eaten pork neck before, but it is a great cut, chewy but tender with a touch of fat.  Super love it. 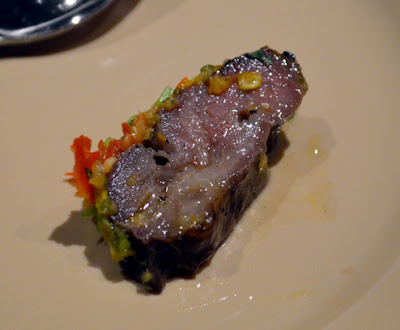 Anne then got stoic with the stirring of the Kung Op Wen Sen, a clay pot filled with glass vermicelli noodle and prawns large enough to see from space. 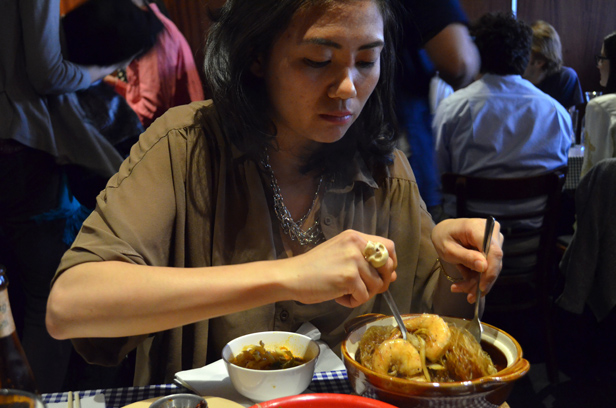 While the clay pot dish was quite good, with noodles perfectly flavored with sweet soy and pepper and the prawns absolutely meaty and fresh, I am not sure I would order it again in lieu of say...more pork neck.  It's a solid dish but not particularly mesmerizing. 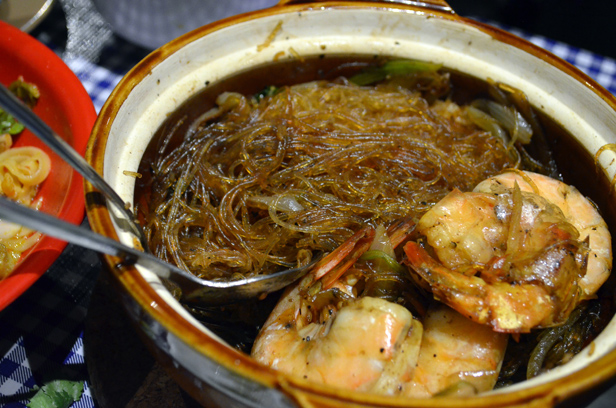 Although.  Anne and I did find some charcoal encrusted bits of pork belly at the bottom of the clay pot, and we both savored that with divine emotion. 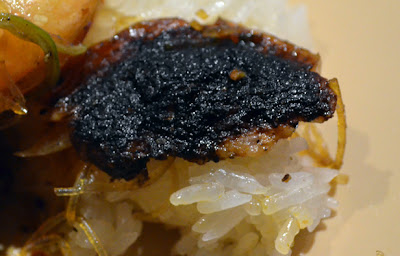 For dessert, though my stomach was absolutely bursting at the brim, my eyes ordered a little somethin-somethin from their sweets menu: the Pok Pok affogato with Vietnamese coffee (obviously the best kind of coffee) and condensed milk ice cream.  Oh. And fried crullers.  Like no big deal. 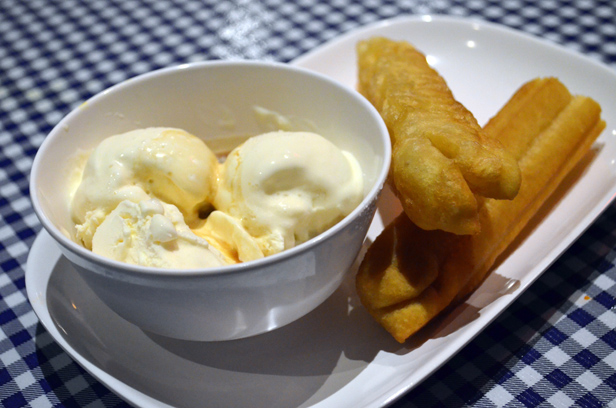 Can I tell you that condensed milk ice cream might be my new favorite flavor of ice cream? 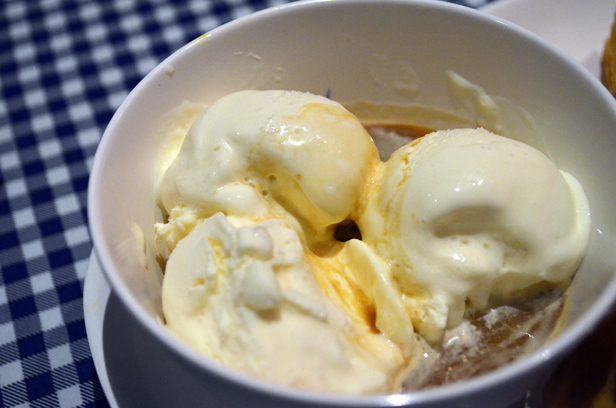 The affogato was so good.  The coffee was bitter, but not too bitter, and the ice cream was so thick, it melted slightly but not too quickly, which was perfect because the freshly fried cruller was so crispy and airy, and was complemented perfectly by thick spoonfuls of the amazing condensed milk ice cream. 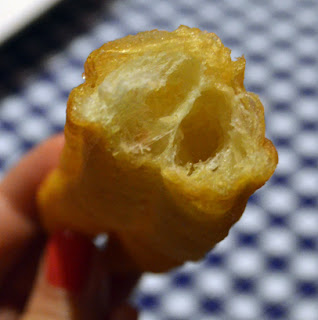 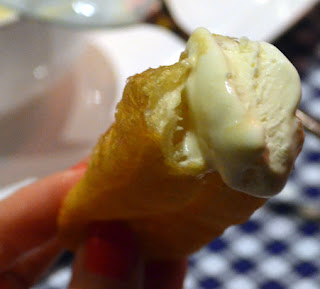 That my friends, is one dreamy bite.

Pok Pok was a really terrific meal.  Anne and I are already thinking about our return visit with more strategic ordering (no noodles, more protein!).  And more affogato!