I've tried to be a bit productive this weekend:
1. I cleaned the apartment (swiffered and all!)
2. Did three loads of laundry
3. Scrubbed the bathtub
4. Cleaned out the fridge

So it's only fitting I start cleaning out my camera along with everything else, and I have been sitting on these Minneapolis photos for three months.  I know!  They're practically moldy!

So here's a brief rundown from my four day work week in downtown Minneapolis:

I ate a few things from the Westin Hotel / Bank Restaurant / room service: 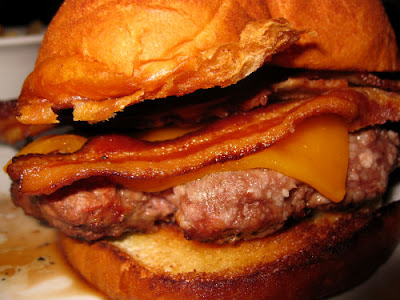 Kobe beef burger with cheddar and bacon.  Surprisingly really good.  The beef was super flavorful, the bacon was wonderfully crispy, and the bun was soft and toasted. 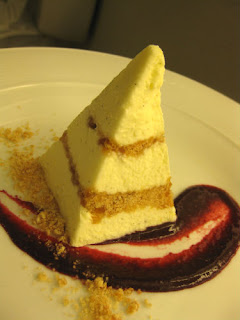 A wild honey semifreddo with raspberry coulis; the room service clerk insisted this was her favorite.  It tasted pretty good though the grahamish cookie layers made the dish too gritty.  I appreciated the pyramid formation though. 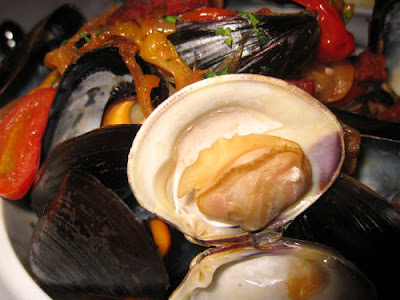 Mussel and clams with tomato and chorizo 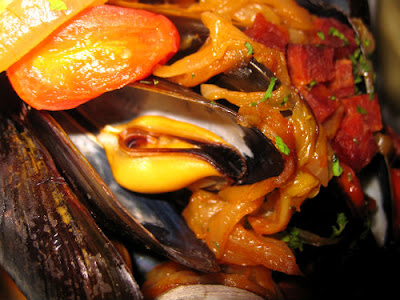 Mussels always sound good to me in theory, but please do yourself a favor and don't order mussels from room service.  I ended up getting sick after eating this dish, and it wasn't even worth it, because the mussels and clams were too chewy (nothing like the perfection that is Bistro Cassis). 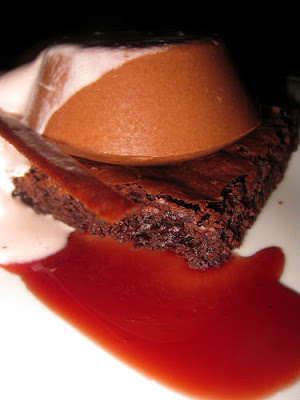 Chocolate brownie dessert redeemed the mussel entree with its fudgy self
In the middle of the week, Stefani gathered a bunch of our colleagues together for dinner at The Sample Room, a cute little tapas place a short drive outside downtown. 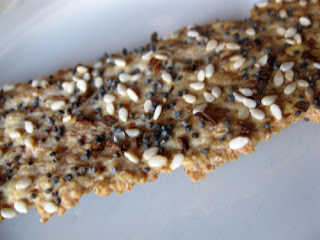 Sesame crackers were part of the complimentarty bread basket.  Love these. 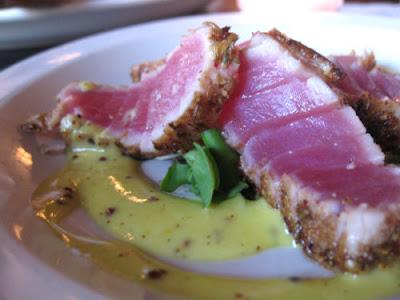 Ahi tuna tasted fresh (but a bit too raw for me - I know Diana can relate!) 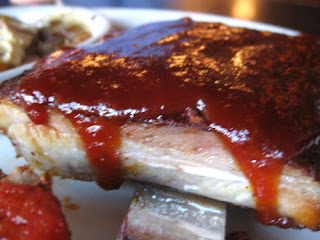 Ribs!  Even though they are gooey beyond compare, I really liked this.  The barbecue sauce had a great, tangy tomato base. 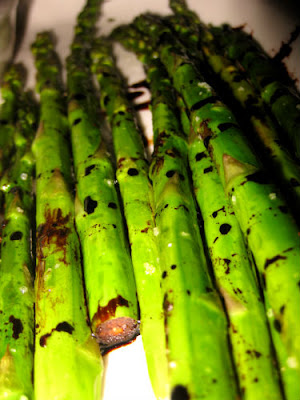 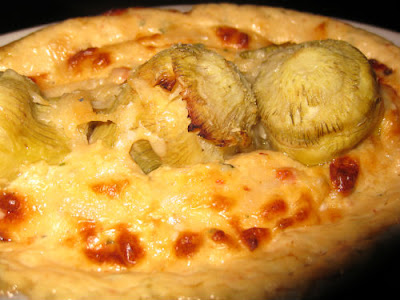 Fire Roasted Artichoke Gratin (the cheese was interesting, but wasn't my cup of tea) 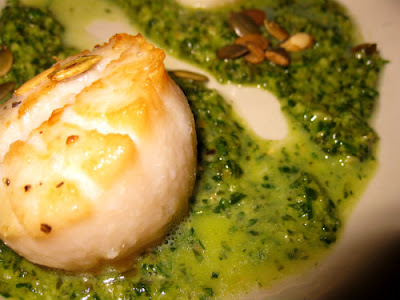 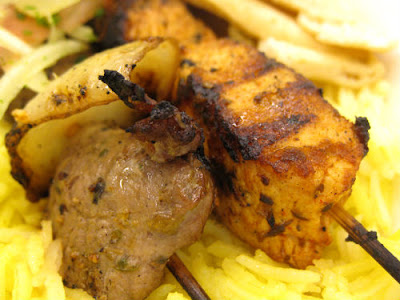 Lamb and chicken skewers on rice.  Pretty good actually for a little restaurant in the Nicolett Mall.  The meat was plenty flavorful and moist.
Dinner at Mission Restaurant 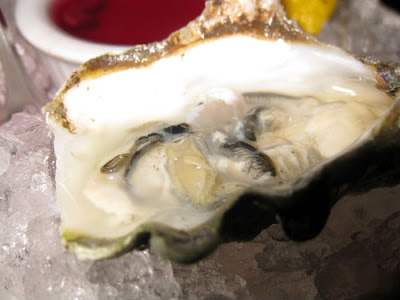 West coast oysters.  Really juicy.  I heart oysters so much.  And during happy hour, all appetizers are half off, so you can eat twice as many oysters! 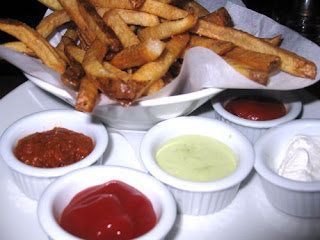 Fries with five sauces.  Some of the sauces were ketchup, mayonnaise, a barbecueish sauce and others.  I tried some of the sauces, but really just dug the fries plain.  I noticed the menu now offers "Fries with four sauces."  I wonder what happened to the fifth! 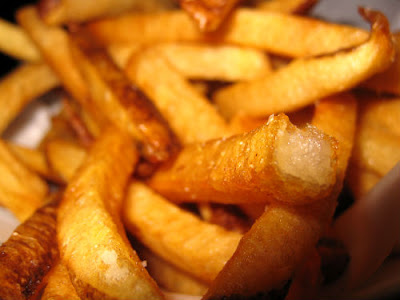 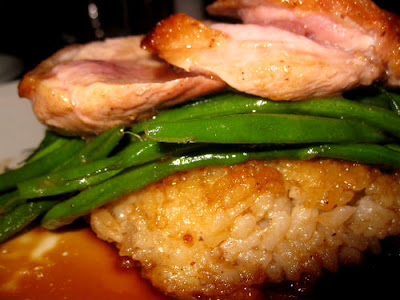 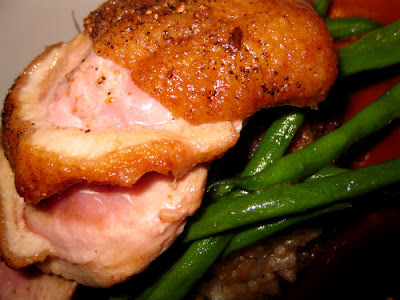 Can you see that perfect ratio of duck fat to duck meat?  This dish was just terrific.  The duck skin was crunchy from a salty shell and the meat ever smoky and succulent.  The risotto cake was excellent also, the outside was crispy, and the inside of the 'rice cake' had chunks of duck meat.  Iloveducksomuch.
Lunch at The Brothers Deli, a New York style deli shop: 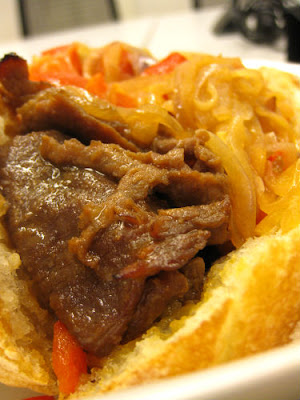 A bulgogi sandwich! At a New York deli!  I've never seen the likes of this in NY, so I had to have it. 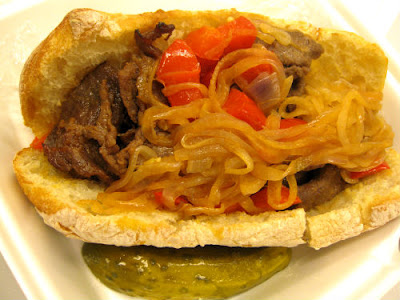 The sandwich was bulging with bulgogi, smothered with caramelized onions and roasted peppers. 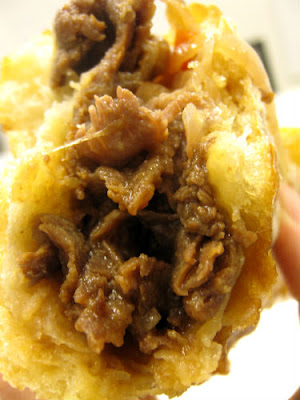 I kind of picked off most of the onions and the peppers, and the sandwich was still overloaded with all of that Korean-marinated meat!  And it was actually really good.  I kind of wished they had an option to serve it over rice, but maybe that's just too Asian.  Loved this as a sandwich also though. 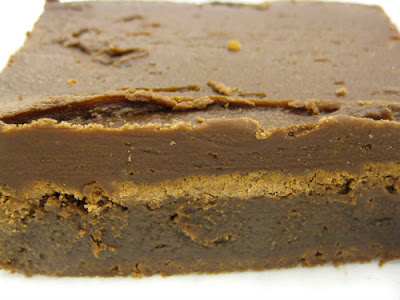 Double chocolate brownie from Brother's Deli.  They just have it all.  That whole top layer is pure sugary chocolate.  You know you want it.
Lunch at Chipotle (you know I gotta keep it real) 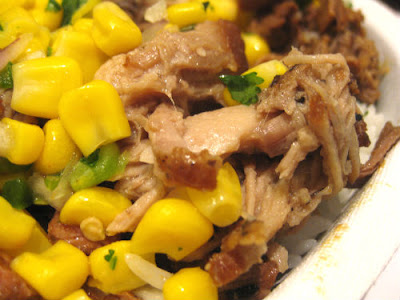 I love myself some Chipotle, and this time I decided to try their carnitas. 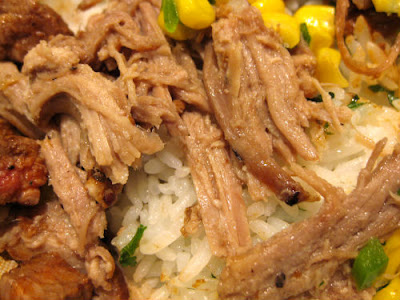 I did not find the carnitas as flavorful as the other meats there.  Barbacoa and steak FTW!
Snack at Red Cherry 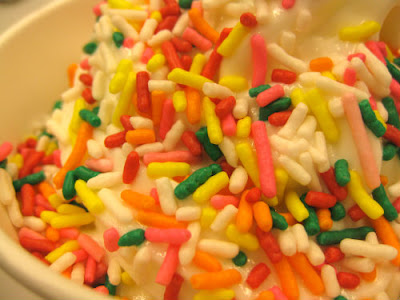 Red Cherry is located inside LeAnn Chin in Nicolett Mall.  As a froyo connoisseur, along with Diana, I had to try the place out, for research purposes, and it totally did not disappoint.  The froyo here is delightfully tart but it has this unique sweet aftertaste that I have never experienced at any other frozen yogurt spot.  And I really like it.  But I have no idea what it is (maybe fat??).  The only downside of Red Cherry is that they have limited toppings (read: no mochi!) but the rainbow sprinkles go perfect with it.
Breakfast and Lunch at Au Bon Pain: 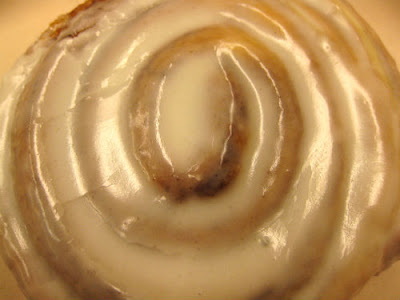 Guess what this is! 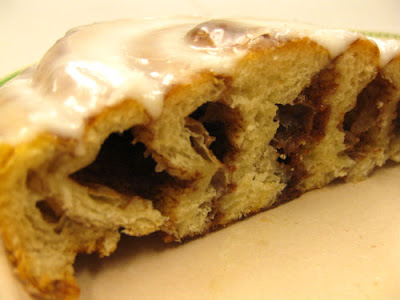 If you guessed cinnamon bun, you are right!  Look at those weird layers!  I actually really like their cinnamon buns.  Don't ask me why.  Just look at that thick sugary glaze coating.  Good cinnamon flavor also. 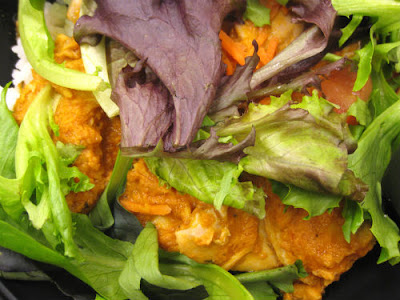 I tried their Mayan Chicken Harvest Rice Bowl: slow cooked chicken and spices served over rice, topped with a salad.  It was okay: the chicken was nice and tender, but not at all spicy, and then seriously, who wants a salad on top of their chicken on rice? (Okay, maybe Greeshma)
Dinner at the Minneapolis Airport - French Meadows Bakery & Cafe 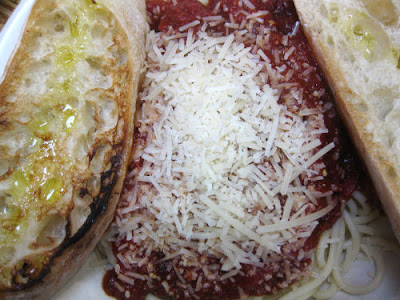 Plain ol' pasta in tomato sauce.  Pretty decent, especially the crispy, grilled bread.
And that's Minneapolis for ya!  With our crazy work hours, food selections had to be a bit quick, but mayhaps I'll get a better chance to try out other dinner spots in the future to share with you!