We got into Cork late in the eve, and as the night was cool and drizzly, we stayed near our B&B and ate at our host's recommendation, Isaac's, a casual restaurant located near some larger hotels.

The food was generally okay.  I ate giant prawns that were cooked in a thick tomato sauce.  My request for extra spicy went fairly ignored as this dish couldn't even be called mild.  The prawns were cooked perfectly though, and thus began my new infatuation for the rest of the trip to eat as many prawns as I could in the Emerald Isle. 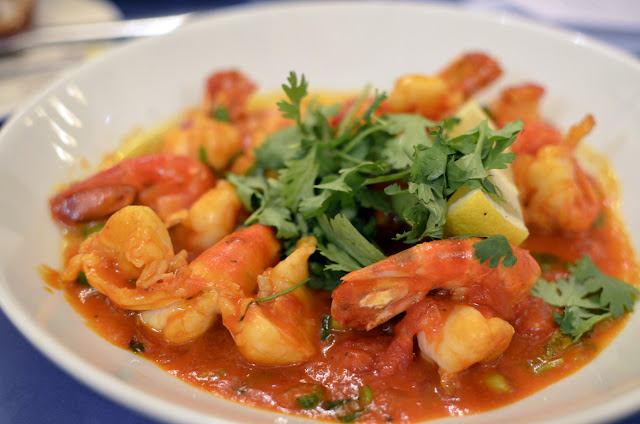 Greeshma had a hankering for fish cakes, though she had no idea what they were, and ordered a small plate, which included one fish cake and a small salad.  I think Greeshma was a little bummed, since she doesn't like fishy fish, and the fish cake was, well, fishy.  They cook a mean version of rustic potatoes here though - golden and perfectly crispy, so she feasted on those. 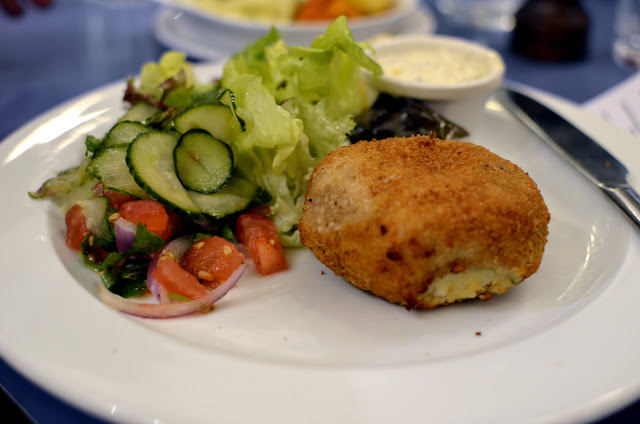 In light of her mediocre meal, Greeshma was ready for dessert, so we popped into a nearby tapas place called Boqueria that was super cute, and welcoming despite the late hour.  They only offer three dessert options, and since the special was no longer available, we happily ordered the other two. 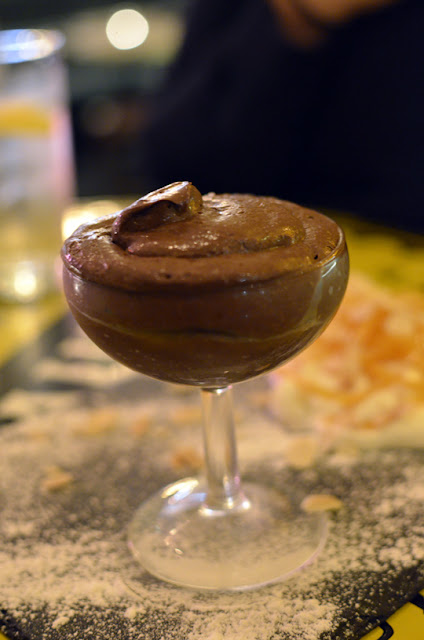 Like a cup of pure chocolate ganache, this dessert was all about sheer decadence. 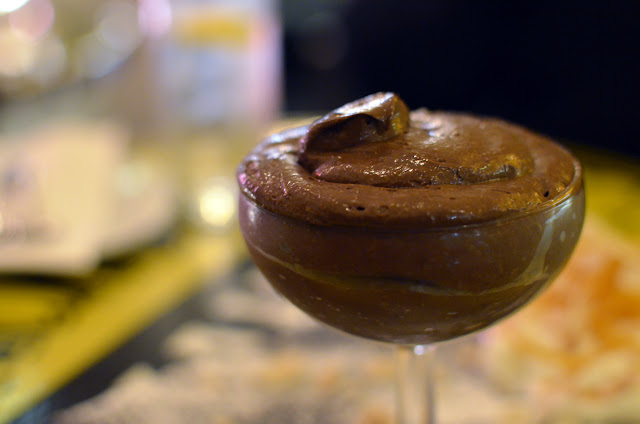 And paired with the whipped cream topped with candied orange zest strips and almond slivers, this dessert was still...just pure decadence.  Ridiculously rich and delicious. 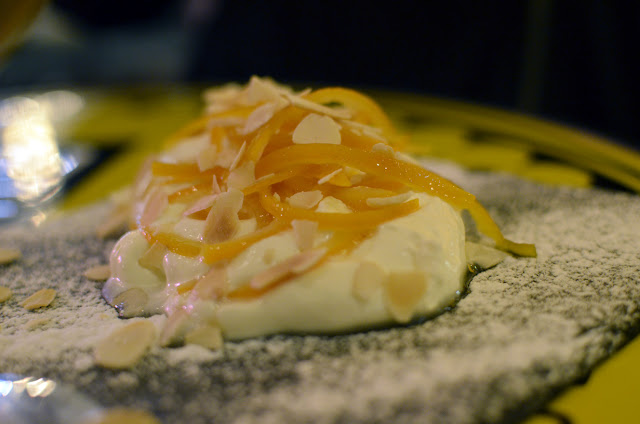 The lemon posset was the absolute opposite of the chocolate dish - so light and refreshing, a cup of delicate cream bursting in citrusy lemon flavor, topped with a thick mixed berry compote. 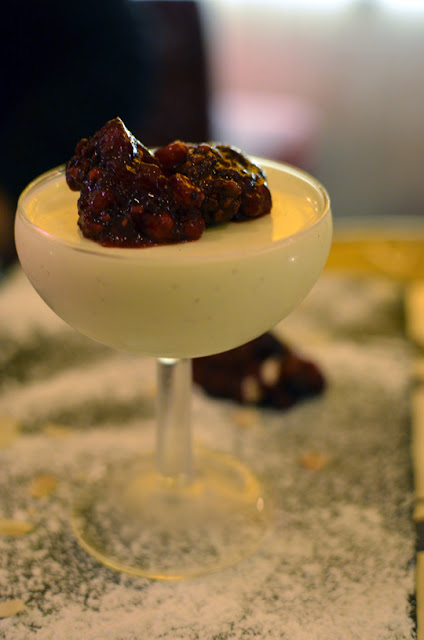 Together, the two desserts worked remarkably well, and I would highly recommend ordering them both if you find yourself in Cork with a sweet tooth to satiate.  In the meantime, I just found this recipe for lemon posset, and I think this will definitely be tomorrow's cooking experiment! 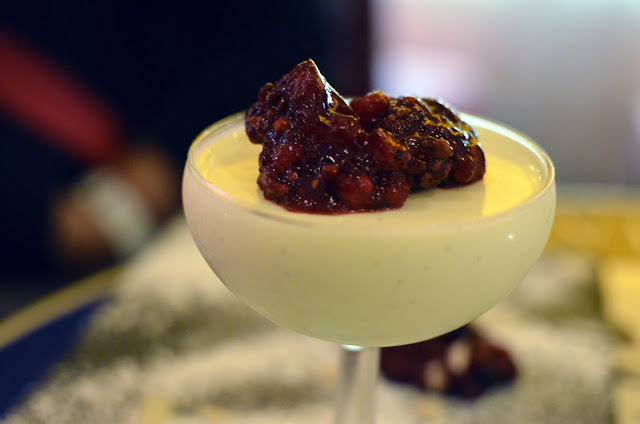 The next day, we did a quick walk around the city, ringing church bells at St. Ann's to the tune of Don't Cry for Me, Argentina, and stopping in for some quick hot chocolate at O'Conaill's, a cute cafe tucked away down a charming alley off St. Patrick's. 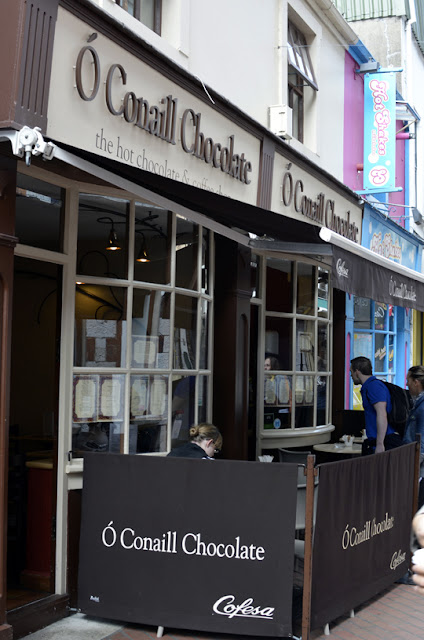 The menu here is long and extensive with options for about just about any flavor (e.g., orange, mint, lavender, etc.) as well as spices like coriander and cayenne.  I had the milk, dark and white chocolate hot chocolate, while Greeshma ordered a chili-spiced version, Belmund ordered hot chocolate espresso and Stefanie went with a traditional hot chocolate.


Each order comes with a tiny cup of their white, milk and dark chocolate nibs.  They are super cute, creamy and tasty.  I think I ended up loving this more than anyone, and easily polished off everyone's chocolate unabashed. 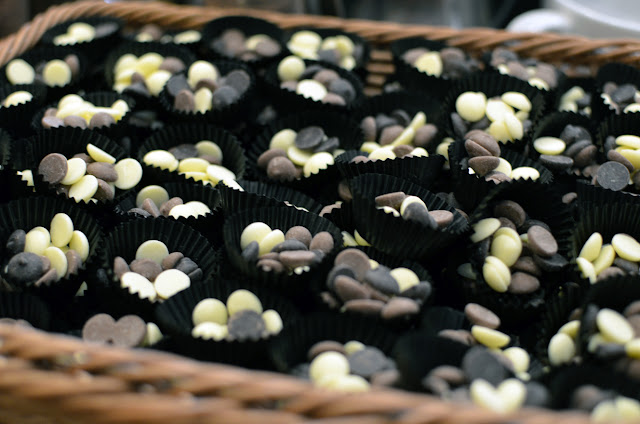 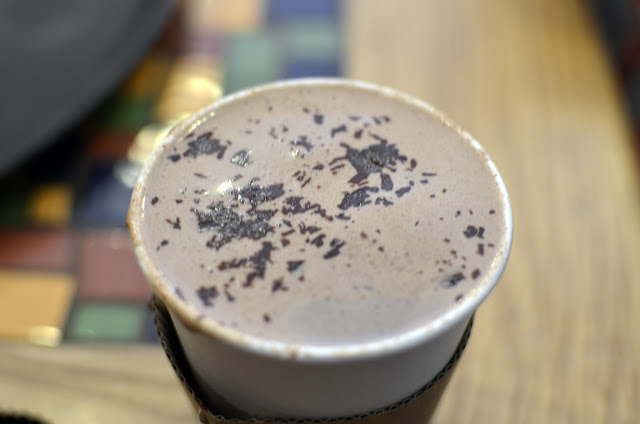 Later that day, Stefanie nonchalantly mentioned, "That probably was the best hot chocolate I have ever had."  I would have to agree - perfect temperature, not too sweet and just enriched with pure chocolate flavor.  Their brownie was also pretty spectacular.


After, we waltzed through the English Market, an indoor market with fresh produce, meats and cheeses that has been open for over 400 years. 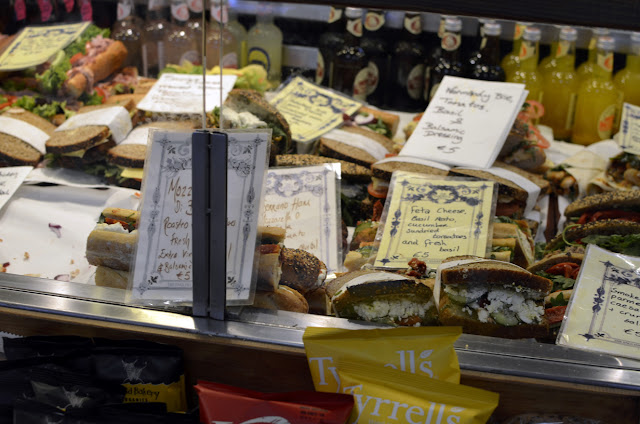 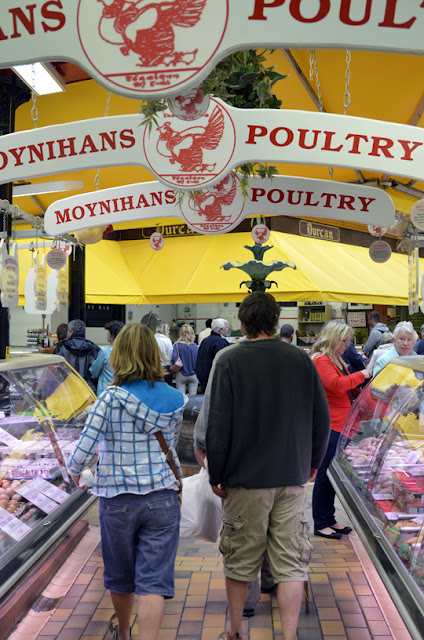 Then it was time to bid farewell to Cork and head to Kinsale for lunch.  Kinsale is widely considered the gourmet capital of Ireland, and is nestled along the southeastern coast, about a half hour drive from Cork.

The destination was Fishy Fishy Cafe, found along the pier by the park with the fountain (the directions as given by the restaurant), and is a bright blue sight to behold. 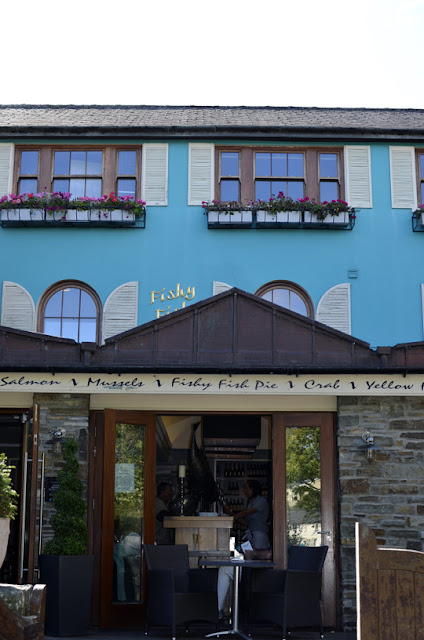 It was one of the few sunny days we had in Ireland, so we basked outside in the sunshine and felt completely serene. 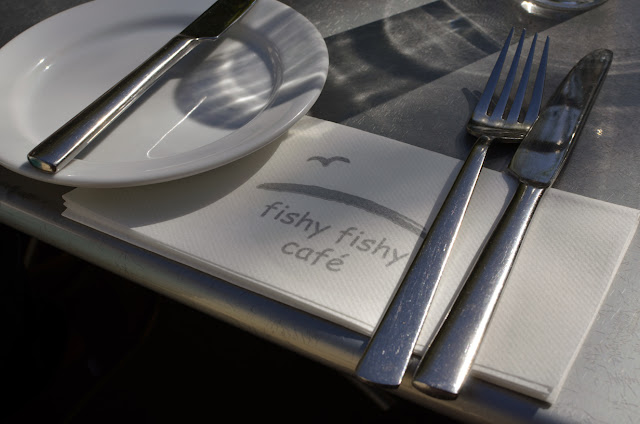 Brown and white breads were served alongside lovely pots of butter and an oyster shell filled with a garlicky spread.  Who doesn't love oyster shells filled with spreads? (Maybe vegetarians.) 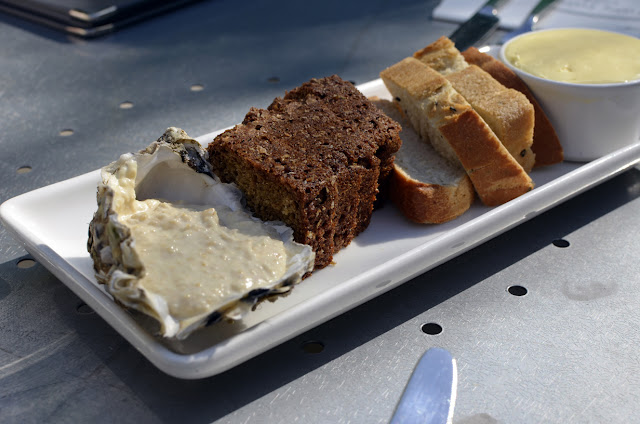 For starters, Belmund ordered a bowl of seafood chowder, featuring a shellfish and tomato-based stock and local fish. 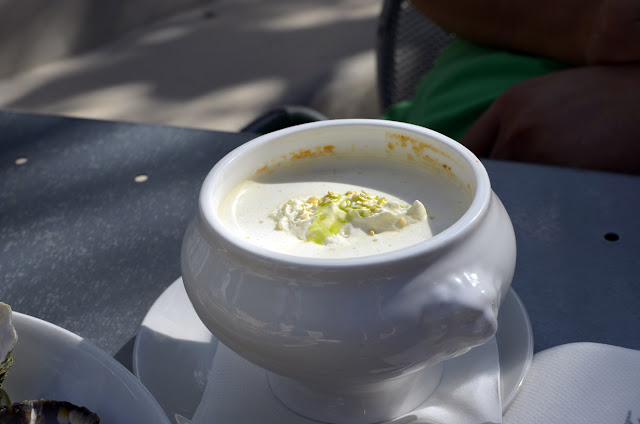 Greeshma and I shared a plate of local oysters. 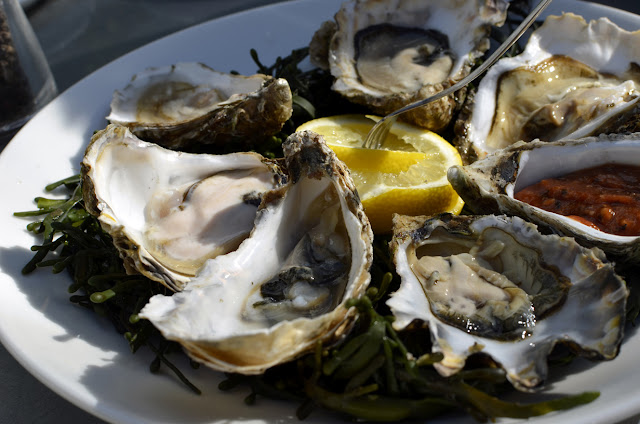 The oysters were mighty fresh, subtle with a touch of brine. 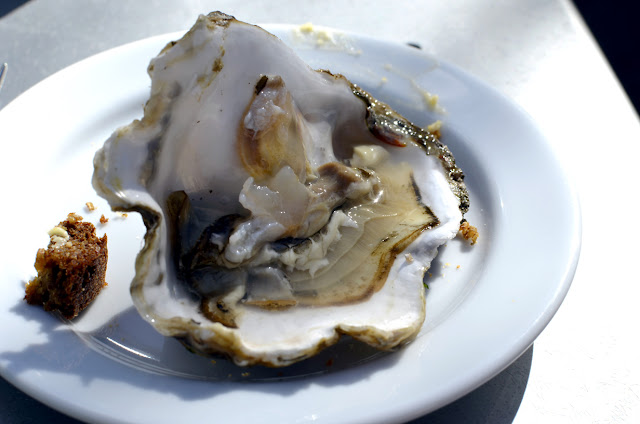 And completely craggly and rustic in appearance.  I slurped them up so fast! 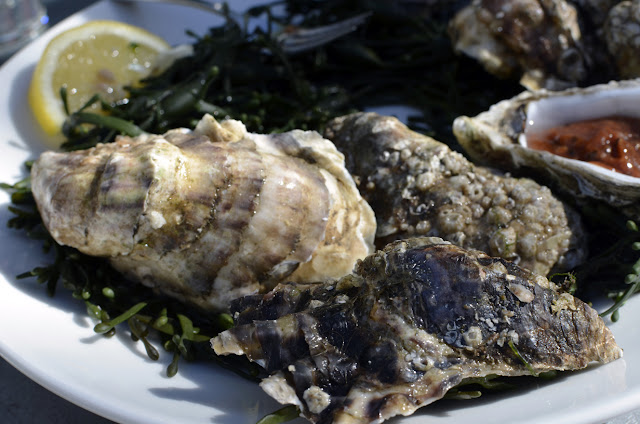 Although those oysters were exquisite, the real star of the show, and really, our whole trip, were these unassuming little guys... 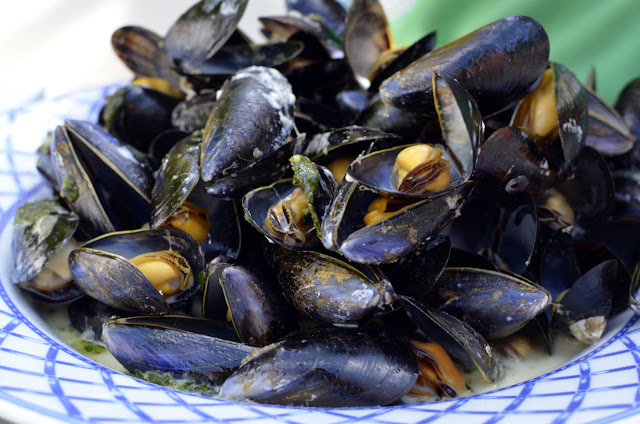 See how Belmund's giant head cannot even compare to this heaping bowl of shelled beauties? 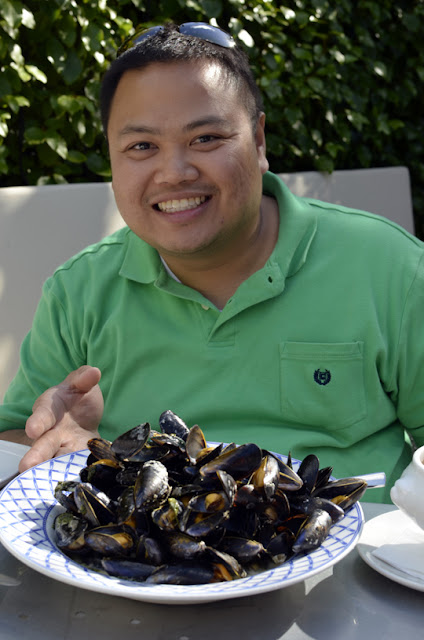 And how Greeshma has just never looked more radiant? 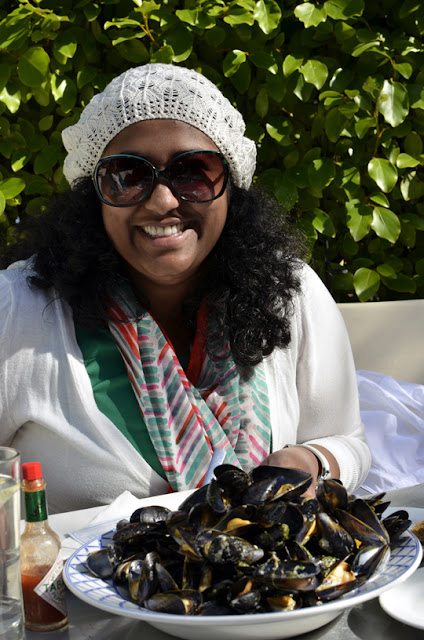 Greeshma was moving too slow on her plate, so I was invited to help her out.  And both of us ate to glorious mussel oblivion, sopping up the lemon and basil scented butter sauce with the frites.  Those mussels are indeed the most tender and freshest mussels I have ever had.

Stefanie ordered a warm salad with dried bananas, rustic potatoes and chunks of chicken.  It looked like a salad I'd be down to eat. 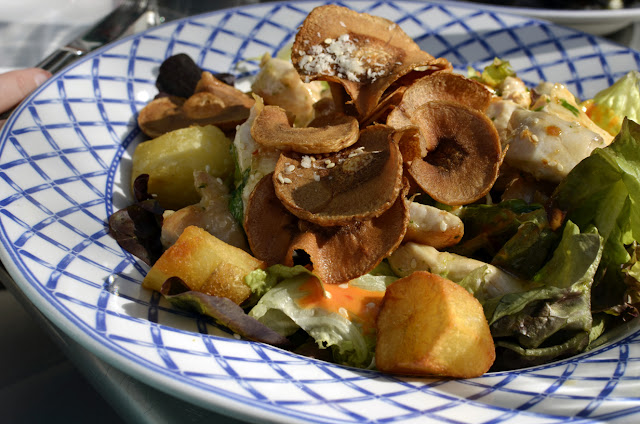 I ordered the special of the day of fried local calamari, frites and lemon and chive mayonnaise. 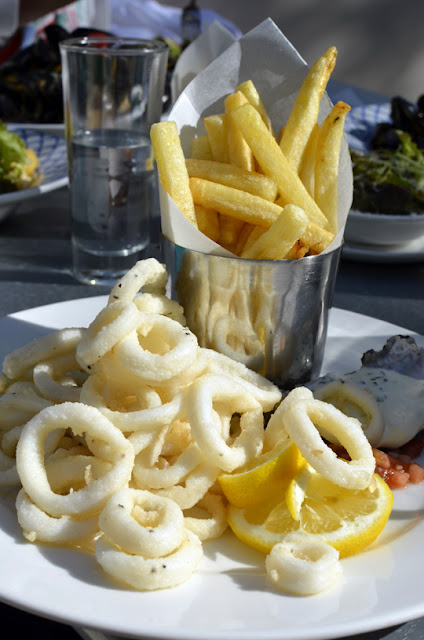 The calamari rings were lightly battered and tender, but I missed all the tentacles that I usually see in calamari dishes.  This was no problem though as Stefanie helped clean up my plate, as I helped clean up Greeshma's plate.  What goes around does come around! 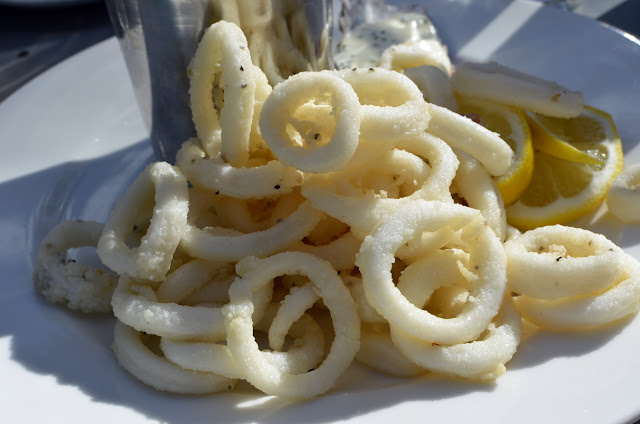 After, we drove to Blarney Castle with our thoughts still in Kinsale at the Fishy Fishy Cafe.  Some of us thought about the handsome, bearded bartender with the bright blue eyes, others thought of each tender mussel morsel.  It was unanimously our favorite meal of the trip.  Sunshine, fresh seafood and smiles all around !

The Blarney Castle was fun also.
I ate a soft-serve Angelito vanilla ice cream cone there. 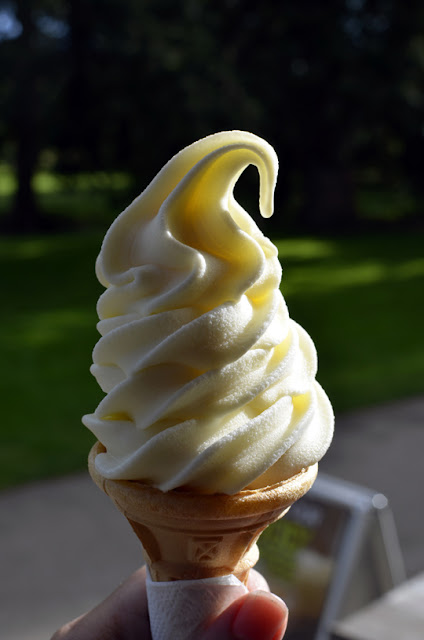 And what do you know?  Ice cream does taste better in the presence of historic stone estates with stones to kiss. 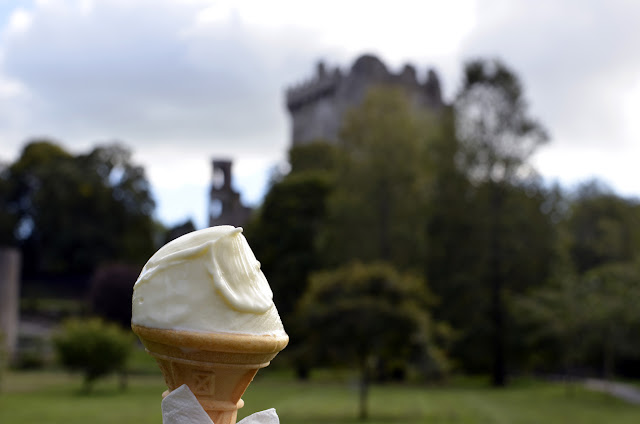 The gems of Killarney and Galway coming next !